Lizzo Reveals Why She's a 'Very, Very Single Bitch': 'I Really Like My Freedom'

"I want it sometimes, but I don't need it," the "Truth Hurts" rapper says of a relationship

Lizzo is 100 percent that single bitch!

On her new LP Cuz I Love You, the rapper-singer says, “I’m my own soulmate” — and in the new issue of PEOPLE, Lizzo confirms she is indeed focusing on herself and her career for the time being.

“I’m a very, very single bitch,” the “Juice” performer, 31, tells PEOPLE. “But even if I were in a relationship, I’m a single-minded individual, and I really like my freedom. I think there’s a lot of people that need to be in relationships and need to be in love. I want it sometimes, but I don’t need it.

“But if the right d— comes along,” Lizzo adds with a laugh, “you better believe I’ll put it on my wall.”

In recent years, Lizzo (real name: Melissa Jefferson) has carved a niche for herself in the pop music world with her empowering lyrics, earnest body positivity advocacy — and confident swagger in her breakup bops, from “Good as Hell” and “Jerome” to"Truth Hurts."

Born in Detroit and raised in Houston (where she trained to become a classical flautist), Lizzo moved to Minneapolis in 2011 to pursue music. She quickly became a local celebrity in the city’s hip-hop community — and was even a protégée of Minnesota native Prince, performing at Paisley Park and recording with the icon before his death.

After scoring a major label record deal in 2016, Lizzo dropped her catchy kiss-off “Truth Hurts” — which includes the memorable lyrics “I just took a DNA test / Turns out I’m 100 percent that bitch” and “I will never ever ever ever be your side chick” — in 2017. But the sleeper hit didn’t hit the Hot 100 chart until it appeared in the Netflix rom-com Someone Great this spring, and Lizzo actually considered quitting music altogether when it didn’t initially perform.

“What a moment in a movie can do for an artist is crazy. I had everything else: the hard work, the good music, touring — but then there’s that extra-special magic that nobody really knows what it is that can really change your life,” Lizzo says. “Now the song that made me want to quit is the song that everyone’s falling in love with me for, which is such a testament to journeys: Your darkest day turns into your brightest triumph.”

RELATED: Lizzo Brings Down the House at the MTV Movie & TV Awards

Now the artist — who recently added new dates to her electrifying Cuz I Love You tour — is already garnering early Grammy buzz. She’s also expected to score a “Gold” certification for her Cuz I Love You album, and “Truth Hurts” is sitting pretty at No. 6 on the Billboard Hot 100. 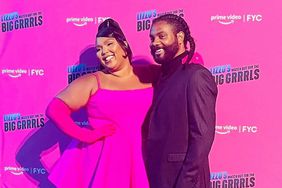 Who Is Lizzo's Boyfriend? All About Myke Wright