Lisa Marie Presley is over $16 million in debt, according to court documents obtained by PEOPLE

Lisa Marie Presley claims she’s in the red — to the tune of $16.7 million.

In court documents relating to Presley’s ongoing divorce from Michael Lockwood, it was revealed that Elvis’ daughter owes debts in a number of areas, including income taxes, a defaulted mortgage and credit card bills.

According to the documents, which were filed on Wednesday and obtained by PEOPLE Friday, Justin Stiegemeyer, Presley’s current business manager who is responsible for “day-to-day finances and paying all of her bills,” disclosed that the 50-year-old had first learned of her debt while her old business manager Provident Financial Management was handling her finances.

Stiegemeyer went on to claim that Presley “had not been provided with proper accountings or notices or been kept abreast of her finances” by her former business manager and that at the time they were fired, Presley had “total liquid assets of less than $20,000.”

He also revealed that “by the end of 2015” there were “no additional funds” other than “the approximately $20,00 of liquid assets” available to Presley to use to pay her debts, adding that the majority of those debts “are related to unpaid income taxes” from 2012-2015, which “total over $10 million.”

In the court documents, Stiegemeyer went on to claim that Presley owes almost $50K in credit card debt, although he added that she has been actively paying down the sum and has managed to pay off the debt on certain cards in full.

Stiegemeyer said that Presley paid off one of three “outstanding American Express cards each totaling approximately $300,000” in October 2017 and that she made the final payment on a “Citicard credit card with a balance due of $111,083” in January of this year.

He also said that Presley expects one of her remaining outstanding AmEx bills to be “paid in full in September 2018.”

“Suffice it to say that in addition to having to pay off these debts, the payment issues with these cards has caused [Presley’s] credit to be significantly impaired,” Stiegemeyer added.

Her business manager went on to state that Presley hopes to begin making payments towards her income tax debt “once we have paid off the credit cards and various legal fee debts and obligations.”

In addition to the income tax and credit card debt owed, the documents claim Presley has defaulted on the mortgage of a $6 million home she owns in the U.K., which she has been trying to sell for the past two years.

Presley states she currently receives a monthly salary of $4,361 from her father Elvis Presley‘s estate, as well as $100,000 in dividends and interest from investments.

In this latest development in the pair’s ongoing divorce battle, Presley detailed her debts in response to a February 2017 court order requiring her to cover $50,000 of Lockwood’s $450,000 in attorney fees.

Presley and Lockwood, her fourth husband, married in 2006 and welcomed their twin daughters Harper and Finley in 2008 before the Graceland successor filed for divorce in June 2016, citing irreconcilable differences and claiming Lockwood was a poor father and “took advantage” of her financially. 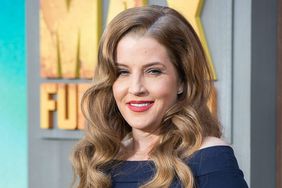