Lily Allen Celebrates a Year of Sobriety: 'So Grateful for My Health and Happiness'

The singer shared a series of before and after shots, showing the change her sobriety has had on her

Lily Allen is feeling grateful on the one-year anniversary of her sobriety!

On Tuesday, the British singer, 35, posted on Instagram to celebrate the milestone, sharing a series of before and after shots that showed the change her sobriety has had on her.

"1 year completely sober ! So grateful for my health and happiness. 😘," she wrote alongside the snaps, which showed a glowing Allen in a red and black bikini, contrasted to a paparazzi shot of her before her decision to go sober.

Hundreds of friends and fans congratulated the singer on her accomplishment in the comments, wishing her well as she continues her sobriety.

Allen is currently vacationing in Capri, Italy. She also shared gorgeous footage of the views and crystal blue water while on a boat Tuesday.

She appears to be traveling solo as the "Smile" singer shared a selfie on Monday with the caption: "The only downside to traveling alone is the photo opportunities are limited."

When asked by a fan why she was by herself, Allen replied, "I love traveling alone."

Allen previously celebrated her sobriety with fans in April, sharing a photo on social media to mark 9 months.

"9 months sober today ! And the beginning of an ab is appearing. Very pleased. Still can't make my bed though," she wrote alongside a mirror selfie at the time.

That same month, Allen made sure boyfriend David Harbour properly celebrated his 45th birthday despite being home amid the coronavirus pandemic.

In a collage shared on his Instagram, Harbour showed off pictures of his at-home party which included colorful decorations, flowers, a homemade birthday cake and cupcakes.

In one of the images, Allen and her girls — Marnie Rose, 7, and Ethel Mary, 8, whom she shares with ex-husband Sam Cooper — are seen sitting at the dining table for the party.

Harbour and Allen, who is the sister of Game of Thrones‘ Alfie Allen, were first linked in January 2019, when they attended the BAFTA Tea Party together.

The pair was spotted together again in August while he was filming Black Widow in London, and following his hosting debut on Saturday Night Live in October when they were photographed heading to the show’s afterparty in New York City.

Later that month, they made their red carpet debut as a couple at the Skin Cancer Foundation’s Champions for Change Gala in New York City. In November, they sparked engagement rumors after Allen was photographed wearing a ring on her left finger. (Reps for the two didn't return requests for comment at the time.)

Most recently the two walked the red carpet together at the 2020 Screen Actors Guild Awards in Los Angeles. 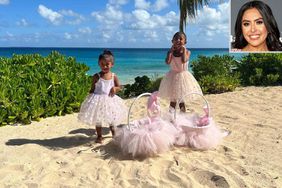 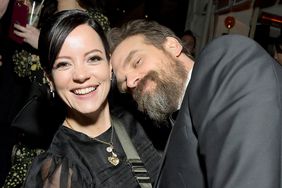