The rapper sparked speculation that he had married girlfriend Denise Bidot in April after he wrote in a tweet, "Happiest man alive! Today is the beginning of our forever"

Lil Wayne is putting an end to the rumors that he married on-and-off-again girlfriend Denise Bidot.

During an Instagram live on Thursday night, the rapper, 38, made his relationship status clear after Nicki Minaj brought up his April tweet that sparked speculation that he and the model, 35, had tied the knot. In the tweet, Wayne wrote, "Happiest man alive! Today is the beginning of our forever. Forever?? Forever, ever?? FOREVER EVER!!!!! The Carters."

In response, Wayne said, "I'm so glad you asked me that. I did not get married."

Wayne went on to clarify that when he wrote "The Carters" in his tweet, he was referring to his sons, who recently started a rap group by that name.

"I said 'The Carters,' and girl, that's my damn sons, that's my sons' little name of their little group," he said with a laugh.

Just a week before his viral tweet, Wayne shared a sweet video of Bidot writing their names in the sand. In the background, he could be heard singing on one of his new tracks, "Okay, you wanna talk about it / Let's write our names in the sand / Draw a heart around it, yeah."

The couple first made their relationship social media official in June 2020 with a series of photos that Bidot shared on her Instagram story.

Last November, many fans believed that the two had parted ways after gossip blogger Love B. Scott reported that they had split due to Wayne's endorsement of then-President Donald Trump ahead of the 2020 election.

"I live the way I love and love the way I live. I'm a lover, not a lighter bekuz they burn out," he wrote in a cryptic tweet at the time. "I am an eternal fire and burning love, either leave with a tan, a 3rd degree burn, or stay and die in love. You're sweating. Sincerely, the fireman."

Then in early January 2021, the model shared a cryptic message on social media writing, "Pretty disappointing when you defend someone throughout everything and they turn out being just as s---ty as everyone said they were," according to The Blast.

Most recently, Bidot shared a photo of her and Wayne to her Instagram in May, writing, "FOREVER."

Wayne was previously married to Toya Jackson, with whom he has daughter Reginae, from 2004 to 2006. He also has sons Cameron, Dwayne and Neal from previous relationships. 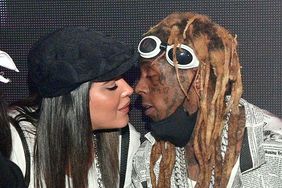