Pete Doherty is celebrating this week after his surprise nuptials to Katia de Vidas!

The Libertines frontman, 42, wed his film editor partner Thursday, according to the Daily Mail.

The rocker, who has previously dated Kate Moss and was linked to the late Amy Winehouse, was then seen alongside his bride Thursday on Instagram.

In pictures shared by his sister AmyJo Doherty, the pair was decked out in their wedding finery.

Representatives for Doherty did not immediately return PEOPLE's request for comment.

Doherty, known in the past for his wild antics — including smashing cameras as well as brushes with the law and violating parole — has reportedly settled down more recently with his partner in France.

They have been together since 2012 and are collaborators in the band The Puta Madres.

In 2019, they went on tour in support of their debut album Peter Doherty & The Puta Madres. The project marked Doherty's first album since Hamburg Demonstrations in 2016.

Aside from his work with The Puta Madres, Doherty is best known for being co-frontman of The Libertines, which he formed with Carl Barât in 1997. 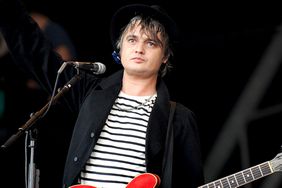