The 59th Annual Grammy Awards marks an exciting milestone for LeAnn Rimes—20 years since she took home the award for “Best New Artist” in 1997.

“I had the flu that night. I had a 104 [degree] fever and did not want to go,” Rimes, 34, tells PEOPLE Now of her big night, which she almost skipped because everyone around her told her, “You’re not gonna win.”

“I’m in the car with my head up against the window of the limo because it was cold outside and I was trying to cool myself off,” she remembers, “And I go, ‘Do I need to write a speech or anything?’ And they’re like, ‘Nah!’ So we got there and I won an award in the pre-show and they’re like ‘Maybe you should think about it a little bit.'”

At just 14-years-old, Rimes says she doesn’t “even remember what was going through my head.”

“I wish someone would have told me back then to pause and enjoy this, but looking back on it when I watch video of it, I see this girl who was wide-eyed and so excited,” she says. “It was a great moment.”

The nominees for this year’s “Best New Artist” include Kelsea Ballerini, The Chainsmokers, Chance the Rapper, Maren Morris and Anderson .Paak. Rimes already has her mind set on who she’s rooting for.

“I love Maren Morris. I think she’s really talented and she’s got her cool vibe going on, [and] I like her music,” she says. “Kelsea Ballerini, too—I think it’s probably between Kelsea and The Chainsmokers. I love The Chainsmokers. They’re sweet guys, too.” 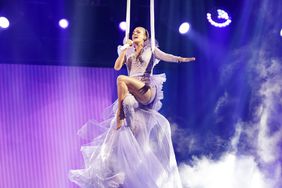