Laura Bell Bundy Assembles Her 'All-Female Dream Team' for 'Get It Girl, You Go' Music Video

"This video celebrates how far women have come in the last 100 years including getting the right to vote," Laura Bell Bundy tells PEOPLE

PEOPLE exclusively premieres the 39-year-old star's 1950s and '60s-inspired music video for her song "Get It Girl, You Go" featuring Shoshana Bean and Anika Noni Rose.

"This video celebrates how far women have come in the last 100 years including getting the right to vote, the right to join the workforce, the right to earn a college degree and to run for public office," Bundy tells PEOPLE of the video premiere timed to the 100th anniversary of the 19th Amendment to the U.S. Constitution on Aug. 18, 1920.

"This year we have a record number of women running for Congress! As a line from the song says: 'It's time to run the world, we're taking over this place. Welcome to the future, it was worth the wait!' I wanted to feature the women running for public office as well as the public (female) figures that support them," Bundy says.

"Let me tell you, there is nothing like making a video during a pandemic!" Bundy says of the clip, produced by CNT Productions. "Shea Carter (one of my fellow co-writers/producers on the song) and I conceptualized and choreographed the video. Then, I bought a pop-up green screen, shot my stuff, and once sanitized, it was delivered to Shoshana and Anika (along with a bunch of 'how-to videos' from me) for them to shoot their parts."

For the star-studded music video, the women filmed clips of themselves at their respective homes across the country. "All the celebs sent in their videos — many doing things 'you might see a woman do'— like Brittany Snow hilariously dyeing her hair," Bundy explains.

"We pulled historical footage and pictures of every Democratic woman running for public office in the upcoming election," Bundy says. "This is my all-female dream team. It was a labor of love."

Describing "Get It Girl, You Go" as a "soundtrack to the election," Bundy previously told fans, "It is the ultimate female empowerment song about women who 'do it all,' and break the glass ceiling. As women, we need to support each other and lift each other up."

Bundy's upcoming album Women of Tomorrow, which will be her first record in nearly five years since 2015's Another Piece of Me, is due out in 2021. 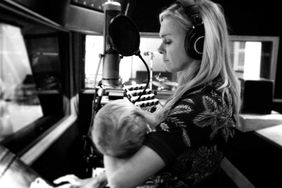