The couple had a busy weekend amid the rapper's delay of his new album, Jesus Is King

Sparks continue to fly for this power couple.

Kim Kardashian West shared a rare intimate photo of her and husband Kanye West on Instagram Sunday, showing the couple embracing while sharing a kiss.

The duo had a rather busy weekend, starting with one of West’s Sunday Service performances in Detroit on Friday, where daughter North shared a sweet moment with her dad on stage. The eldest West child enthusiastically sang and danced along to the music, showing off her missing front tooth.

North also joined her parents for the rapper’s first preview of his yet-to-be-released album “Jesus is King,” which had been postponed from its original release date this past Friday.

West also hosted a special show at Detroit’s Fox Theatre called Jesus Is King: A Kanye West Experience, where the father of four played the upcoming album for his fans, as well as a short excerpt from his upcoming IMAX film Jesus Is Lord.

Phones were not allowed inside the venue, but Kardashian West provided brief updates throughout the night.

“I can’t wait for you guys to see this @Imax film,” she wrote alongside a clip of the project, which she said will be released in October.

Kardashian West then shared that Jesus Is King is now scheduled to be released on Sunday.

“Kanye’s doing a listening session in Chicago tomorrow, then NYC Sunday. He’s dropping the album Sunday,” she wrote on her Instagram Story, adding that he’s making “just a few final tweaks to the mixes.” 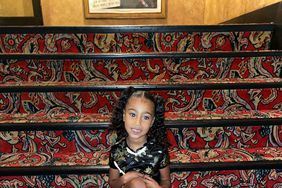