Kelly Clarkson Opens Up About Being on an 'Emotional Roller Coaster': 'Everything Has Been Crazy'

Kelly Clarkson is opening up about the "emotional roller coaster" of the past several months.

In an interview with Glamour UK published on Tuesday, Clarkson, 38, said that it has been "exhausting" being a working parent of toddlers and teenagers from home during the novel coronavirus (COVID-19) pandemic.

"Everything has been crazy," the star said in the interview, which appears to have been conducted prior to news breaking of her filing for divorce from husband Brandon Blackstock.

Clarkson said that she's had to remind colleagues that she is a working mom — "and I'm not an absentee mom. I'm a full-on mom," she said. "I already have abandonment issues, so I don't want to pass those down."

The American Idol winner shares daughter River, 6, and son Remington, 4, with Blackstock, who is also dad to daughter Savannah, 18, and 13-year-old son Seth.

"You get married and you're like, 'Oh, I have no one for the dance or to walk me down the aisle. You know what? I'm not going to get married, just going to elope,'" she said.

Clarkson filed for divorce from Blackstock, 43, in Los Angeles on June 4, PEOPLE previously reported. The singer cited irreconcilable differences as the reason for the divorce, and listed their separation date as "TBD."

The Voice judge also told Glamour UK, "There are always things that happen that come up that bum you out, but at the same time you've got to recognize at some point though, that it's made you who you are. You are thankful and I'm a very strong individual."

"I'm very confident and I've been forced to find that in myself. I've been forced to at a very early age," she said. "At some point, I say thank you to my father, who passed away last year. But I thank him as I wouldn't have been able to be all that I am right now without all of that. So, you just take your cards you're dealt, and you do the best you can with them."

Clarkson said that each person has a "choice" about how to handle "whatever cards you're dealt."

"And we all don't make those right choices all the time," she said.

The singer also discussed the idea of self-love, and said that it's the key to loving others.

"Until you can love yourself and love who you are, I don't think that you're capable of applying it to others," she told Glamour UK. "You’re just holding yourself back and you're risking beautiful relationships that you could have with people because you just still haven't worked out your own damage."

On Friday, Clarkson was photographed for the first time since news of her divorce filing was made public, seen walking her dog in Los Angeles.

"Kelly is spending time in L.A. with her kids," a source told PEOPLE. "She has been low-key and mostly stayed at home. She seems to be doing okay."

Clarkson and her family had previously been social distancing on their ranch in Montana. 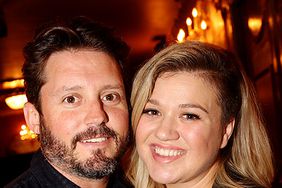