Katy Perry and Orlando Bloom's relationship seems stronger than ever

Katy Perry and Orlando Bloom’s relationship seems stronger — and more serious — than ever.

“Orlando and Katy are great. They are dating exclusively again and things seem more serious,” a source tells PEOPLE just one day after the duo met Pope Francis in Vatican City and explored some of Rome’s famed sights.

“They are both excited about it and don’t want to hide, but at the same time they are trying to keep privacy as well,” the source adds.

As for Bloom, the insider says he “seems very happy,” adding, “It’s obvious that they both missed each other after their split.”

“Their relationship seems stronger now,” the source continues. “Orlando got sick of being single. Dating different women is not so alluring to him anymore.”

Earlier this week, the 33-year-old “Bon Appétit” singer confirmed she was “spoken for” and “very happy” after being asked by Entertainment Tonight if she would ever consider dating an American Idol contestant.

She went on to wink at the camera after saying she’s “not Mrs. Broom” — a reference to a photo Perry had shared to her Instagram Story on Monday of Bloom holding a broom, which she had labeled “Orlando Broom.”

While documenting their trip abroad on Saturday, Perry revealed she had traveled to Rome in order to give a talk on meditation at the Vatican’s fourth annual Unite to Cure conference.

Perry was joined by her “mama,” Mary Hudson, and Bloom, whom Perry described as “my darling.”

During the conference, Perry spoke about how beneficial transcendental meditation has been to her life on both a personal and professional level.

“I noticed before I was meditating I started to short-circuit a little bit, like an iPhone, you know, when it just decides to stop and turn off on you and you’re like, ‘I was in the middle of something!’ So I knew that I had to take care of my mental health and my mind, which is the greatest asset of my body, besides my heart,” she said during a panel discussion.

“I notice when I meditate that my whole brain kind of opens up,” she continued, adding that not only does she find “some of the most incredible stillness,” but meditation also “brings some of the best, most creative ideas to the surface for me.”

After meeting the Pope, Perry and Bloom explored the Sistine Chapel and Colosseum, where Perry shared a sweet photo of the two posing together outside.

Perry and Bloom first sparked rumors of a reconciliation earlier this year by vacationing together in the Maldives. They went sightseeing in Prague two months later.

In March, the duo also spent time together in Tokyo, where Perry seemingly dedicated her song “For Me You See” to Bloom as he took in a show on her Witness world tour in the audience.

“[I feel] very loved. And this next song is about being so loved and so seen that you never ever have felt this feeling before. This feeling of love,” Perry said.

“This is…for Bubba Doo,” she added, seemingly revealing her pet name for him.

RELATED VIDEO: Katy Perry Says She’s ‘Spoken For’ and ‘Very Happy’ — Is She Officially Back with Orlando Bloom?

A source previously told PEOPLE in March that they were taking it slow following their split in February 2017.

The insider added: “They are not girlfriend and boyfriend. They do seem very happy together though. Orlando always had the nicest things to say about Katy. He loves spending time with her.” 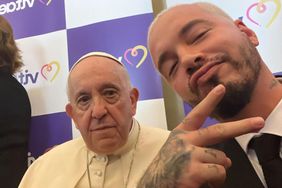