These stars are back to crown a new singing sensation!

On Wednesday, ABC announced that Katy Perry, Luke Bryan and Lionel Richie will all return for American Idol's upcoming season, the show's fourth installment on the network after its former tenure on Fox. Ryan Seacrest will also be back to host the reality competition series.

The show was one of the first programs to air virtual, socially distanced broadcasts amid the novel coronavirus (COVID-19) pandemic.

"American Idol has always been able to bring people together, entertain and inspire, and I am so proud of how this show continued to deliver joy and laughter into people's homes during a time when we needed it the most," Karey Burke, president of ABC Entertainment, said in a press release. "There is no one who we feel more confident about leading us into a new season of high notes than Luke, Katy, Lionel and the incomparable Ryan Seacrest."

Showrunner and executive producer Trish Kinane added that the trio of judges are "fun, astute and really know how to spot talent." Kinane said: "Their chemistry is undeniable, and we are delighted that they, along with host Ryan Seacrest, are returning to find the next superstar and take American Idol to new heights next season."

The show is currently hosting "Idol Across America" virtual, remote auditions across all 50 states. The new process allows hopefuls to demonstrate their vocals from anywhere, face-to-face with an Idol producer. The new season is expected to premiere sometime in 2021.

ABC renewed American Idol ahead of its season 3 finale in May, which was filmed remotely, including a performance from Perry. Last season's winner, Just Sam, who was crowned virtually, offered Idol hopefuls a message as they begin this new process.

"You might be auditioning from your bedroom, your living room, but you have to treat this as if you're on the Idol stage in front of millions of people," she said in the video.

Reflecting on his career, Seacrest, 45, opened up to PEOPLE in 2016 about how his life changed after landing the Idol hosting gig back in 2002.

"I can't even begin to compare my life then and now," he said at the time. "I mean, when this all started, I was living in a one-bedroom apartment and splitting the rent with another dude."

"I was just going out there and trying my best," said Seacrest, who co-hosted the first season with Brian Dunkleman before flying solo after. "It took a few seasons before I embraced the fact that it was a big live show and things were not always going to be perfect. I got more comfortable every year."

New Mom Katy Perry Is Back on Set of American Idol with Her Fellow Judges — See the Photo! 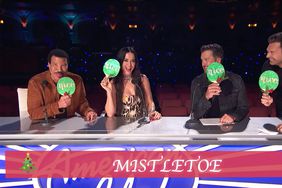