Kanye West Enjoys a Private Museum Tour in the Berkshires with Tyler, the Creator

Kanye West headed to the Mass MoCA, or Massachusetts Museum of Contemporary Art, in North Adams

Kanye West ventured to New England on Thursday to take in some art.

The “I Love It” rapper and pal Tyler, the Creator headed to the Mass MoCA, or Massachusetts Museum of Contemporary Art, in North Adams. Dressed in a blue plaid flannel shirt and black puffer coat with his hair bleached, Kanye enjoyed a tour of artist James Turrell’s Into the Light exhibit, according to a tweet from the venue.

But in typical Kanye style, West took it one step further — enjoying a tour of the exhibit with the artist himself!

On the museum’s Twitter account, West is quoted saying to Turrell, “You finally got me here, bro.” In the photo, West and Turrell are shown bathing in the pink light of the exhibit.

In addition to spending time with the artist, West posed for photos with museum employees.

An avid art collector, West played a role in inspiring an upcoming exhibition at the MoCA. “Suffering from Realness,” an exhibit that opens in April of 2019, is titled after a line in his song “N—– in Paris” with JAY-Z.

The couple’s $60 million compound was turned into a star-studded winter wonderland for one night, spending an estimated $1.3 million, according to an expert’s estimation. 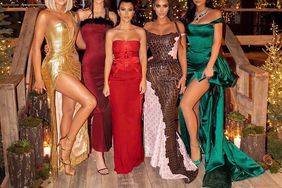