"I might legally change my name to Christian Genius Billionaire Kanye West for a year," the rapper said at Fast Company's Innovation Festival

Kanye West has announced his plans to run for president in 2024 — but before potentially moving into the White House the rapper might change his name.

“When people say it’s crass to call yourself a billionaire, I say I might legally change my name to Christian Genius Billionaire Kanye West for a year until y’all understand exactly what it is,” he said. “It will be on the license plate.”

That’s when West shifted the conversation to his plan to run for president.

“When I run for president in 2024 —” West said, to laughter from the audience. “What y’all laughing at?”

West said that if he were elected president, he would “create so many jobs.”

Kanye West Praises His ‘Omnipresent’ Family for Keeping Him Motivated: Without Them, ‘I Would Just Rest on My Laurels’

“As black designers out of America, you can’t have an opinion,” he said. “You can only be the consumer… you can only be a demographic.”

The conversation later turned from politics to innovations that West is making as a designer.

The “God Is” singer said that Yeezy is set apart from other brands in part because he doesn’t follow the typical cycles of the fashion industry.

West also revealed that he plans for the new Yeezy sneaker to be made partly out of algae and that he is moving the company’s headquarters to Cody, Wyoming.

“We have 4,000 acre ranch and a couple of other properties out there,” the father of four said. “We’re going to be farming and going seed to sow and have our own cotton, hydroponic farm, hemp farm, and wheat farm… and getting into how we can have last impact with the dyes because our colors are a big signature of the brand.”

West also said that the company is aiming to be more “responsible.”

“So dyeing is one of the main things that’s impacting the planet in the fashion industry so just being responsible from A to Z,” he said. “Our goal within the next two years is to bring the manufacturing back to America, South America, and North America and bring it back stateside and also present jobs for people back here.” 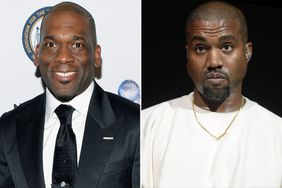