The rapper allegedly jumped out of his car and punched a fan, reportedly knocking him to the ground

Kanye West is a named suspect in a battery report from an alleged physical altercation that occurred in downtown Los Angeles on Thursday morning, an LAPD source confirmed to PEOPLE.

The source says, "The report was taken at 3 a.m. and the incident occurred at Santa Fe and Bay street. No arrests have been made and it's being investigated by our Newton division." FOX 11 was first to report the news.

According to the outlet, the incident occurred outside the Soho Warehouse, and West, 44, was leaving when a fan allegedly walked up to his car and asked him for an autograph.

After words were exchanged, the rapper allegedly jumped out of his car and punched the fan, reportedly knocking him to the ground. West then left the scene.

A rep for West did not immediately respond to PEOPLE's request for comment.

Meanwhile, in a social media post shared around 1 a.m. on Thursday by Evan Ross, the "Hurricane" rapper is seen hanging out with his girlfriend Julia Fox, Madonna, Antonio Brown, Floyd Mayweather and others in a private room at celebrity hotspot Delilah.

A source tells PEOPLE, "They all had dinner in the private dining room. They came separately but just ended up having dinner together. Kanye and Julia wouldn't leave each other's sides."

In 2014, the rapper was arrested for "assaulting" a photographer at Los Angeles International Airport. According to the BBC, the photographer accused West of punching him and grabbing his camera.

At the time, he was sentenced to 250 hours of community service, two years probation and 24 anger management sessions, according to the outlet.

Similarly, West was arrested in 2008 for vandalism and battery over an altercation with photographers at the same airport where he allegedly damaged a camera. He was later released on $20,000 bail, and the case was dismissed after he paid for the photographers' broken equipment attended anger management counseling. 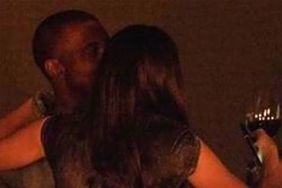