Justin Timberlake is speaking out in support of Britney Spears following her court hearing on Wednesday, where she said that she wants "to end the conservatorship" she's been under since 2008.

"After what we saw today, we should all be supporting Britney at this time," Timberlake wrote on Twitter. "Regardless of our past, good and bad, and no matter how long ago it was… what's happening to her is just not right."

In Britney's 30-minute virtual address to Judge Brenda Penny in Los Angeles court, she said that she has been forced to have an IUD as a form of birth control because her conservators — which include her father, Jamie Spears — "don't want me to have children - any more children."

Said Timberlake: "No woman should ever be restricted from making decisions about her own body."

"No one should EVER be held against their will… or ever have to ask permission to access everything they've worked so hard for," he continued on Twitter.

Timberlake ended his tweets with a message of support, on behalf of him and his wife, actress Jessica Biel.

"Jess and I send our love, and our absolute support to Britney during this time," he wrote. "We hope the courts, and her family make this right and let her live however she wants to live."

The New York Times' documentary Framing Britney Spears, which aired on Hulu earlier this year, explored the end of their relationship — including Timberlake's "Cry Me a River" song and music video that seemed to depict Britney in a negative light.

The film also featured a clip of a 2002 interview with radio hosts Star and Buc Wild, in which Timberlake admitted he and Spears had had sex.

His private revelation upset many of Britney's fans. And following the doc's release, Timberlake shared an apology to Britney and Janet Jackson, who was met with far worse repercussions than Timberlake after the now-infamous wardrobe malfunction at the 2004 Super Bowl.

"I am deeply sorry for the times in my life where my actions contributed to the problem, where I spoke out of turn or did not speak up for what was right," Timberlake shared on social media in February.

"I understand that I fell short in these moments and in many others and benefited from a system that condones misogyny and racism," Timberlake continued in part. "I specifically want to apologize to Britney Spears and Janet Jackson both individually, because I care for and respect these women and I know I failed."

Britney has since posted throwback photos with Timberlake, seeming to suggest that their relationship has mended.

Meanwhile, Britney said on Wednesday that she didn't know that she was able to petition for the conservatorship to end. "I shouldn't be in a conservatorship if I can work and provide for myself and pay other people. It makes no sense. The laws need to change. I've worked since I was 17 years old," she said.

"I just want my life back," she explained at one point. "It's been 13 years and it's been enough."

Following the hearing, several other stars also shared their support for the singer — including Mariah Carey, Halsey, Brandy, and Rose McGowan. 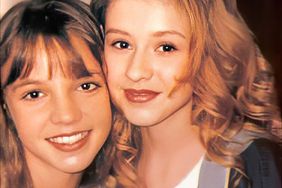