Even with an injury so serious that he's had to postpone his tour, Justin Timberlake is still full of jokes

Even with an injury so serious that he’s had to postpone his tour, Justin Timberlake is full of jokes.

The pop star, 37, announced on Instagram late Wednesday that his doctor has directed him not to sing for yet another month because of his bruised vocal cords. He apologized profusely to his fans.

“Hey Guys, I’m sure you have heard that I’ve had to postpone several tour dates due to bruised vocal cords,” he wrote on Instagram. “My vocal cords are healing, but they are not all the way back to normal yet, so my doctors want me to continue to rest my voice. They have asked me to hold off on singing until next month. I’m really sorry, I want to be back on the stage and I am doing all I can to get there quickly. Thank you for understanding — I see all of your posts and I appreciate the support and the love. I look forward to coming back stronger than I was before. More to come on rescheduled dates.”

While Timberlake may’ve been bummed about the news, his friends Jonah Hill and Trevor Noah were quick to cheer him up.

First, the Superbad actor commented on the photo, touting his own singing talents.

“I have decided to fill in [for] JT on his remaining dates,” Hill said. “It’s what we do in our incredibly small circle of people with extraordinary voices. Feel better. I got you until you do.”

In response, the Grammy winner quipped, “Well guys…I was gonna wait for my next post to unleash this wonderful news. BUT…you heard it here first. Jonah crushes ‘Mirrors’ too so you guys are gonna LOVE IT. Thanks man!”

And The Daily Show host, who’s also under doctor’s orders not to use his vocal cords after losing his voice, was eager to bond with Timberlake over the condition.

“Let’s go on a silent retreat together JT,” he commented.

At the end of November, the singer shared in a statement that he’d postponed another concert, one of many within the past year.

“As a result of bruised vocal cords, the Justin Timberlake Man of The Woods concert currently scheduled for Nov. 27 at Staples Center in Los Angeles is postponed,” it read. “Fans are advised to hold onto their tickets pending updated show information as they will be honored at the rescheduled event. Justin Timberlake is sorry for the inconvenience to his fans.”

And in October, the New York Times best-selling author of Hindsight announced the news on Instagram just hours before a show in New York City at Madison Square Garden that his doctors had ordered him to rest.

“Hey guys, I’m sorry to announce I have to postpone the show at MSG tonight on doctor’s orders,” he wrote. “My vocal cords are severely bruised. I’m gonna make this up to you and the new show will be on my birthday, January 31. More info to come. Again I’m so sorry to do this, but excited to see you soon. Love, J.”

Timberlake then postponed planned shows in Buffalo, New York, and Tacoma, Washington. His Los Angeles concert was to be his first back since the injury.

Throughout the electric show — produced by the creative and design studio Fireplay — Timberlake performs cuts from his canon of classics (“Cry Me a River” (complete with smoky river), “SexyBack,” “Suit & Tie”) and his 2016 song of the summer “Can’t Stop the Feeling!” as well as tracks off his latest album, Man of the Woods.

The *NSYNC alum previously had an operation to remove his throat nodules — benign growths on the vocal cords — in 2005. 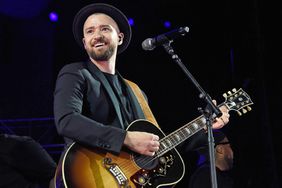