Justin Bieber Opens Up About 'First Thanksgiving as a Married Man': 'Relationships Are Hard'

Justin Bieber has a lot to be thankful for this year.

The newly-married 24-year-old singer celebrated his first Thanksgiving as a married man, and opened up about all of the things he’s grateful for in a heartfelt Instagram post.

“Happy late thanksgiving to everyone,” Bieber began his caption of a pic of a snowy forest. “First thanksgiving as a married man, first time hosting thanksgiving. First time both sides of the family has come together. Relationships are hard and love isn’t always easy but thank you Jesus for showing me how.”

He reflected further, writing: “Every day is a learning process, trying to be more like him, patient, kind, selfless, boy I got a long way! But gods grace is sufficient !”

Bieber’s first time hosting Thanksgiving was actually a combo celebration. He also threw Hailey Baldwin a 22nd birthday bash at the gathering and gave her a super-sweet surprise.

Bieber’s mom, Pattie Mallette, shared a video of Bieber smashing a huge sheet cake into Baldwin’s face. In the Instagram video, the audio was replaced with Lauv’s “I Like Me Better” but everyone appears to be giggly and in on the fun. In fact, the couple shared a frosting-filled smooch afterward.

Baldwin also got a sweet birthday message from her new mother-in-law. “HAPPY BIRTHDAY @haileybaldwin !! I LOVE YOU!! I’m SO #THANKFUL to have you as a daughter!!!” Bieber’s mother, 43, tweeted.

She certainly feels part of the family. A week ago, Baldwin changed her Instagram handle to reflect her new married name, changing it to read, “Hailey Bieber,” and swapped her bio to “Hailey Rhode Bieber.”

Last week she also wore a custom Levi’s trucker jacket with her new married last name splashed across the back at the opening of the brand’s new Time Square Flagship store in N.Y.C.

The couple got married in a secret courthouse ceremony in September, just two months after their engagement.

And since their wedding, Bieber has taken a step back from music. A source told PEOPLE that his decision to take a break is proving to be an adjustment for the pop superstar — but not an entirely unpleasant one.

“I wouldn’t say he’s unhappy, but he’s unsettled,” the source said. “He is in love with Hailey and he’s very happy about that. He knows he has achieved so much at a very young age. But I’ve seen this before, he’s left with the feeling of ‘is this all there is?’ ”

The source added, “It’s a very mature thing to do. But of course, there are people who are blaming her as if she is keeping him from working.”

Baldwin knew she wanted to marry Bieber quickly. “I see no reason to wait. When you know it’s right, it’s right.” she previously told The Cut. 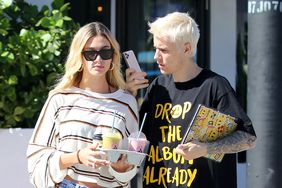 Justin Bieber and Hailey Baldwin Spend Thanksgiving Together in Miami