"We got in the studio and that magic that we spoke about, we felt it again," Nick Jonas said. "We're on cloud nine at the moment"

The Jonas Brothers are back and better than ever!

After releasing “Sucker,” their first new track in nearly six years, at midnight on Friday, Nick Jonas, Joe Jonas and Kevin Jonas sat down with the Morning Mash Up on SiriusXM Hits 1 for a new interview.

In the interview, the brothers discussed the single, their significant others and why they decided that now was the best time to reunite.

“It definitely wasn’t one conversation, it was many,” Nick, 26, said. “We started spending a lot of time together and we all kind of felt that there was a magic and there is a magic when we’re together that we missed.”

“We felt like we wanted to feel that magic again, so we talked about it and after a few conversations and a bit of healing that needed to be done with us as family, we all came to the decision to do this again,” Nick continued. “We got in the studio and that magic that we spoke about, we felt it again. We’re on cloud nine at the moment.”

The brothers also spoke about including their significant others — Danielle Jonas, Priyanka Chopra and Sophie Turner — in the epic music video for “Sucker.”

“They were excited,” Nick, who married Chopra in December, said. “I think that’s the cool part about this next chapter. We’ve been saying this, but ‘family is our favorite ‘f-word.'”

Joe, 29, also shot down rumors that he and fiancée Turner are already married.

“We’re not married yet,” Joe laughed. “We’re gonna get married this year, so we’re getting all the final plans together.”

Kevin — who married his wife Danielle in 2009 — also shared the advice he gave his younger brothers when they met their significant others.

“I think the advice I gave them was just, enjoy it and take the time you need together — because that’s what I did and I felt so good about it,” the 31-year-old said.

The trio also made an appearance on the Elvis Duran Show on Friday, where they said they have 30 to 40 new songs already recorded.

“We’ve got a lot of songs that we recorded… we have probably like 30, 40 songs recorded that we can’t wait to release,” Joe said. “So I think in the next few months we’re probably gonna hear more.”

The pop group officially confirmed their return on Thursday morning.

They shared the news on Instagram as their label, Republic Records, distributed a press release announcing “Sucker” and the boys’ upcoming appearance on The Late Late Show with James Corden next Monday through Thursday.

“It’s nice to be able to finally tell someone,” Nick admitted in a clip from Carpool Karaoke. “We’ve kept this a secret now for almost seven, eight months.”

Last week, a source confirmed to PEOPLE that the band would be reuniting to release new music, revealing Nick, Joe and Kevin had a breakfast meeting at the Polo Lounge at The Beverly Hills Hotel in Los Angeles in early February.

Rumors about a reunion first started popping up in January 2018, after the Jonas Brothers’ dedicated Instagram account was reactivated following almost five years of silence. Over a year later, though, the account had yet to post any new images or clips — but that all changed Thursday.

The band split up in 2013. At the time, Nick told PEOPLE they were stepping back because “prioritizing our family is really important to us.” 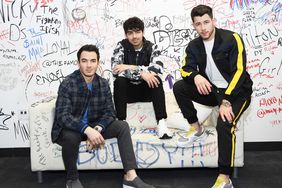 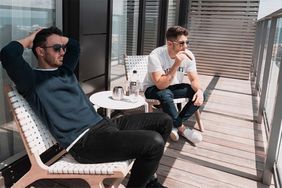