Alena and Valentina are truly the luckiest girls in the world!

From the minute Kevin and Danielle Jonas' daughter Alena was born in February 2014, her uncles have been obsessed with her.

And checking his heart!

Joe wasted no time when it came to teaching Alena a few tricks. Here she is, fetching him a beer.

In November 2016, Nick and Joe became uncles again, this time to baby Valentina.

It was love at first sight for Nick when Valentina joined the Jonas fam.

The uncles both got quality Valentina time when they spent Christmas with their family in 2016.

Uncle Nick is so sweet with his youngest niece.

Why walk when your Uncle Joe can carry you?!

There's nothing Uncle Nick won't do to make his niece Valentina laugh. That includes putting pinwheels in his hair!

The girls got to spend some time at the piano with Uncle Joe!

Looks like Joe Jonas dressed up as the Best Uncle Ever for Halloween in 2017.

Nick is the King of Sweet Instagram Captions. In this photo, he said of Alena, "You light up my world every single day."

Joe called himself, the "🍀 luckiest uncle 🍀" and we've got to agree!

"LIVE FROM NEW YORK ITS UNCLE TIME!!" Joe wrote as he showed lucky Alena the set of Saturday Night Live.

Nothing's sweeter than time with Uncle Nick ... and cotton candy!

And now the girls have some pretty awesome aunties!

Is there anything cuter than this photo of Sophie Turner and Joe Jonas snuggled up with Valentina?

The group is one big happy family!

Thanks to the love and support of her aunts and uncles, Alena was all smiles on her first day of kindergarten. Mom Danielle said uncles Nick and Joe and aunts Sophie and Priyanka were a little nervous for their niece's first day, but they "knew she would be fine" because she inherited dad Kevin's outgoing personality.

"They were so pumped, and I was sending pictures of her all day," Danielle told PEOPLE. "They're getting to experience everything with me." 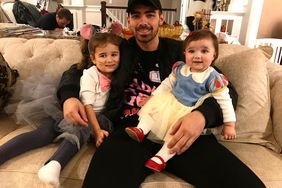