Like millions of others across the globe, JoJo Siwa can appreciate a good Adele cryfest in the car.

After the 18-year-old star split from girlfriend Kylie Prew in October, it was the British singer who helped inspire a flood of tears with her 2015 hit "All I Ask."

Siwa told E! News that she was driving in the car with her Dancing With the Stars partner Jenna Johnson when the track came on and brought the waterworks.

"One day Jenna played 'All I Ask' on the car ride home from getting a spray tan, and I was sobbing because it was practically how my relationship ended," she said. "I literally told her, it's the day before we did our Sandy and Frenchie routine on DWTS, and I [said], 'I'm gonna be Streaky Sandy. Stop playing this song, I'm gonna be Streaky Sandy!'"

The Dance Moms alum and Prew broke up after nine months together in October, while Siwa was competing on Dancing With the Stars (she eventually placed as the season's runner-up).

RELATED VIDEO: JoJo Siwa Says She and Ex Kylie Prew 'Aren't as Close as We Used to Be' But Are Both 'Happy'

She told PEOPLE at the American Music Awards earlier this month that while their time together was "amazing and incredible," the relationship had run its course.

"Obviously I've talked about [it], we broke up," she said. "And one thing that I'm grateful for is that we're both okay. We obviously aren't as close as we used to be, but we're both okay. And we're both happy, and that's all that matters."

Siwa told E! New that while she was still in the thick of the breakup, she just needed some "sympathy."

Looking ahead, Siwa told PEOPLE that she's ready to embrace the single life.

"I've been straight working every single day," she said at the AMAs. "However, single JoJo is funny. Every day she's like, 'I want to marry somebody,' and then the next day she's like, 'Ugh, I'm so happy to be single.'"

Days earlier, she told PEOPLE that she had yet to start dating after her split from Prew, but that she wouldn't mind a "cuddle buddy."

"I haven't started dating at all, anybody, but whatever happens happens," she said. "I fell in love with somebody who I didn't ever expect to fall in love with. We met on a cruise ship, she was my best friend. And then we went to Disney together and all of a sudden ... it kind of all happened. And so I think I learned to just trust life and whatever's supposed to happen is going to happen." 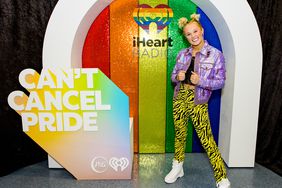