The Voice coaches had some friendly trash talk amid the finale

It wouldn’t be a competition without some trash talk, and The Voice‘s veteran coach Blake Shelton and newcomer John Legend had plenty of it with the season 16 finale Tuesday night.

“I like John, but he can kiss my ass,” Shelton, 42, joked to E! on the red carpet ahead of the finale. “This is a competition.”

But there was no “ass kissing” for Legend, 40, that night.

Maelyn Jarmon, who was coached by the All of Me singer, was crowned the winner, beating out all three of Blake Shelton’s country-singing contestants: runner-up Gyth Rigdon, Dexter Roberts, who placed third, and Andrew Sevener, who placed fourth.

Legend, new to the show this season, reveled in the victory, especially when going up against his friend and costar with such odds. He teased that the country star was an “arrogant bastard” for his trash talk ahead of the finale.

“I really love Blake and I’ve really enjoyed getting to know him this year. He’s a very arrogant bastard,” the Grammy Award-winning singer said to reporters at the winner’s press conference following the show. “I had a feeling he was going to kiss someone’s ass after this show and I was right.”

Jarmon’s win marks the first victory on the show for Legend, adding this accomplishment to his EGOT (Emmy, Grammy, Oscar and Tony) winning status, and he believes she will one day have her own list as well.

“Well, I don’t know if she wants to do all the other letters but I definitely think she can win some Grammys,” Legend said of the 26-year-old singer. “I mean, a voice like that is very special and it’s not just special for a singing competition, it’s special period. It’s special for any kind of vocalist … She has an extremely rare voice and I think she touched a lot of hearts through this season and she has the ability to do that again.” 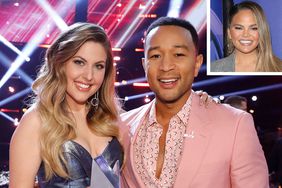