Joe Jonas and Sophie Turner’s surprise Las Vegas wedding paid homage to the late King of Rock in more ways than one.

After performing the new Jonas Brothers single “Sucker” with bandmates Nick, 26, and Kevin, 31, at the Billboard Music Awards on Wednesday night, Jonas, 29, and Turner, 23, headed to Chapel L’Amour inside A Little White Wedding Chapel to exchange vows during a ceremony officiated by an Elvis Presley impersonator — on the exact date of the “Heartbreak Hotel” singer’s 52nd wedding anniversary to Priscilla Presley.

At that time, Elvis was the world’s top-earning entertainer, starring in up to three movies a year and singing his way through their soundtracks. The couple first met eight years earlier, when he was stationed in Germany with the army and she lived on a military base with her Air Force Captain father. The two began seeing each other (“It was a very innocent time,” Priscilla later said. “We still had morals, very high standards.”) and Presley proposed with a three-carat diamond in December 1966.

For their ceremony, Elvis opted for “a black brocade silk tuxedo and Western boots,” according to the Las Vegas Sun. Priscilla designed her own beaded chiffon gown, which was “trimmed in seed pearls.” She stared at her new husband from beneath a three-foot veil that was “secured by a rhinestone crown.”

“The cake itself was a yellow sponge cake,” Aladdin Hotel pastry chef Denis Martig recalled. “Each layer was filled twice with apricot marmalade and a kirsch [liqueur] flavored Bavarian cream…glazed with fondant icing and decorated with royal icing and marzipan roses.”

Not unsurprisingly, Elvis and Priscilla’s first dance was to his 1956 hit “Love Me Tender.” The marital bliss didn’t last long though as they later divorced in 1973.

During Jonas and Turner’s ceremony, the Elvis impersonator told the couple to hold hands and look into each other’s eyes, before having them recite their vows together.

“I promise you, I will never leave you. I will love and trust you, all the days of my life,” they said. “In sickness and in health… forever and ever.” 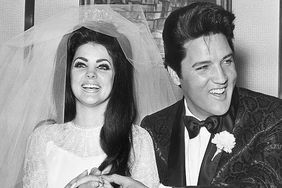 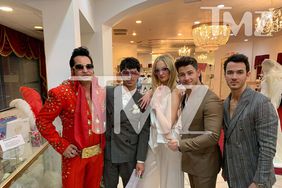