In video footage shared online, Jason Derulo is seen charging at and striking at least one person

Jason Derulo was involved in a brawl in Las Vegas after allegedly being called Usher.

The Las Vegas Police Department says the fight broke out Tuesday at around 2 a.m., reportedly at the Aria Resort & Casino, when Derulo "committed a battery against two individuals," a statement obtained by PEOPLE reads.

"On Jan. 4, 2022 at approximately 2:22 a.m., LVMPD Officers responded to an altercation at a nightclub located in the 3700 block of South Las Vegas Boulevard. The altercation started when the suspect, identified as Jason Derulo, committed a battery against two individuals. The victims did not want to press charges against Derulo, who was trespassed from the property."

Both representatives for Derulo and the Aria Resort & Casino did not immediately respond to PEOPLE's request for comment.

In a video of the incident obtained by TMZ — and shared on social media — Derulo appears to charge at and strike at least one person after someone off camera is seemingly heard saying: "Usher, f--- you bitch."

Security quickly intervened, and Derulo was then reportedly asked to leave the property on a trespass order.

Police say there were no injuries and a police report was ultimately not filed after the incident because "the victims did not want to press charges against Derulo," per AP. However, the men have up to a year to file charges, according to TMZ.

In November, the "Savage Love" singer spoke to PEOPLE about how much his life has changed since welcoming his first child — son Jason King — with ex-girlfriend Jena Frumes.

"I think when you're chasing your goals, your goals are usually very selfish," he added. "But having him has completely shifted my mindset. Now it's about, 'How do I become the best inspiration for him? How do I make sure that I'm in a position where I can help make his dreams come true?' That shift is probably the best thing that's happened to me. It's a whole new reason for thriving." 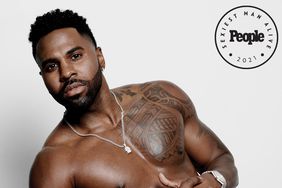