“Sign of the Times” is a nearly six-minute rock ballad, co-written by Styles and producer Jeff Bhasker. It is the first song Styles, 23, released as a solo recording artist since One Direction took their hiatus back in early 2016.

“Just stop your crying, it’s a sign of the times / Welcome to the final show, hope you’re wearing your best clothes / We could meet again somewhere, somewhere far away from here,” the crooner sings.

In late March, Styles revealed the title of his hotly-anticipated debut single, and coincidentally the announcement was made on the 30th anniversary of Prince‘s classic album, Sign o’ the Times.

“Thanks for having me,” Styles Tweeted upon release of the song. His former bandmates soon chimed in, “Love it, H,” Niall Horan wrote in response, while Liam Payne added, “Pproud of you H. Glad you’re getting to do your own thing.”

Earlier this week, Styles was spotted filming the music video for his debut single in Scotland, where he was winched from a helicopter above remote farmland shoreline in a secret location.

In December 2015, Styles registered four songs under his solo name through ASCAP (American Society of Composers, Authors and Publishers): “Already Home,” “Coco,” “Endlessly,” and “5378 Miles,” which is also the distance between Los Angeles and London.

Styles will likely perform “Sign of the Times” when he is set to be the musical guest on Saturday Night Live April 15. 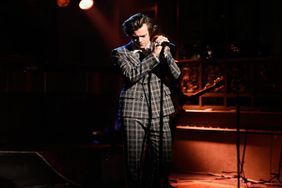