Gwen Stefani Almost Ruined Blake Shelton's Marriage Proposal: 'I Was Trying to Get Out of Going'

"I was like, 'I think we should just cancel the trip,'" the songstress told Kelly Clarkson about her visit to Oklahoma, where Shelton proposed

During her appearance on The Kelly Clarkson Show this week, the 51-year-old revealed that she nearly canceled her visit to Blake Shelton's Tishomingo, Oklahoma ranch, where he asked the big question.

"I had no idea, obviously. In fact, I was trying to get out of going to Oklahoma because it was getting too complicated with COVID and the family," she told Clarkson, 38. "I was like, 'I think we should just cancel the trip.' It was one of those. Then we got it together and we ended up going. [Our family] was all there."

Unbeknownst to the songstress, Shelton, 44, had been hiding the ring "in the compartment on the door of my truck for about a week," he revealed on the Bobby Bones Show this week.

Stefani also revealed a sweet detail about her fiancé's pre-proposal: Shelton sought permission from her dad!

"He's so old-fashioned!" said Clarkson. "He talked to your dad first."

Shelton ultimately surprised his wife-to-be by asking her to help him light the fireplace. When she opened the cabinet to retrieve a fire starter, she was surprised to find her engagement ring in a box.

RELATED VIDEO: Gwen Stefani and Her Sons Cope with Dyslexia: 'It's All Genetic, They Have Some of Those Issues'

"I was like, 'What? Are you serious?'" she told Clarkson with a smile. That's when the pair's family gathered around to celebrate the newly engaged pair's special moment. Stefani said they weren't able to capture her reaction on video.

Later in the segment, Clarkson showed cute photos of Shelton as a little boy, referring to his pageant past, which Shelton talked about when visiting the show in October.

"I'm having a weird moment. I'm on your show talking about my engagement," Stefani said. "It's just like what?"

"And you're engaged to this guy who's a beautiful pageant queen, I mean king!" Clarkson said with a laugh, correcting herself.

To Bobby Bones earlier this week, Shelton spoke about how he wanted the big moment to go.

"The only thing I had planned, Bobby, was that I knew I wanted to do it in Oklahoma while all her kids were there [and our siblings]," he told the radio host. "I didn't want to take her away or do something private away from the kids. I felt it was important for the kids to be a part of that moment, so that's what I did. I had the ring for a couple weeks; maybe 2½ weeks."

Stefani and Shelton announced their engagement on Oct. 27. They've been dating since 2015. 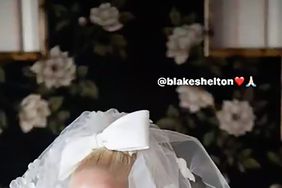