Gwen Stefani Climbs Blake Shelton Like a Tree During Surprise Duet in Vegas: 'Thank U for Coming'

"Thank u for coming out and singing," Gwen Stefani wrote to her longtime boyfriend Blake Shelton

Gwen Stefani isn’t shying away from public displays of affection with her boyfriend Blake Shelton.

On Thursday, Shelton, 43, made a surprise appearance onstage during Stefani’s Las Vegas residency show to perform their duet “Nobody But You.” Stefani shared a fan-recorded video of herself excitedly jumping onto Shelton at one point during the show on her Instagram.

“You guys are such an inspirational couple after a divorce… I hope I’m as lucky as you are in finding Love the second time around,” one person wrote. “You guys are the cutest!!!!!!!❤️?❤️,” another added. “Cowgirl found her cowboy ?,” one joked.

Another pointed out that Stefani seems to unleash her inner child when she’s around her beau.

“This is pure love!! She feels like a kid next to him!,” the person wrote.

Stefani also shared a photo of the pair on her Instagram moments before posting the video and expressed her gratitude for Shelton’s cameo.

@blakeshelton thank u [sic] for coming out and singing #nobodybutyou @zappostheater@phvegas ? Gx,” she wrote.

This isn’t the first time Shelton surprised his lady love — most recently he gifted her with a giant bouquet of roses for Valentine’s Day which Stefani documented on her Instagram story.

“Blakey, I got my Valentine’s flowers … they’re absolutely ridiculously beautiful,” the singer said as she circled the expansive collection of red roses with her video camera.

The lovebirds delivered a sweet performance of their new track at the 2020 Grammy Awards last month which marked their first-ever live rendition of the song.

During their duet, Shelton hit the stage ahead of his longtime girlfriend and kicked off the performance by singing solo initially. Shortly after, Stefani joined him on stage wearing in a sheer, cream gown that was complete with red and gold accents.

The couple’s performance included sprinkles of their romance. Shelton and Stefani faced one another and even locked eyes as they sang. Stefani held Shelton’s hand as they concluded the love ballad. 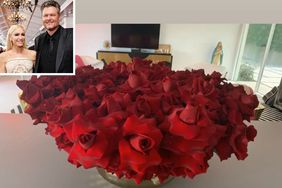