Though the couple only shared a sweet hug following their duet, Gwen Stefani and Blake Shelton couldn't take their eyes off each other

Gwen Stefani and Blake Shelton took the stage together again, this time for her NBC Christmas special.

The couple performed their holiday hit, “You Make It Feel Like Christmas,” during Stefani’s one-hour holiday program by the same name, which aired on Tuesday evening.

Though the pair only shared a sweet hug following their duet, the mother of three, 48, and this year’s Sexiest Man Alive, 41, couldn’t take their eyes off each other.

Stefani called herself a “lucky girl” on Twitter, writing, “It was incredible to write with @BlakeShelton & share the stage for a song that is so joyful & Christmas-y!”

Shelton made another cameo during his girlfriend’s special, appearing in a sketch in which her younger self jokingly declared, “I hate country singers. They’re really annoying.” The country crooner later enticed Stefani with some mistletoe.

The stars previously sang “You Make It Feel Like Christmas” earlier this month when they reunited on The Voice, the NBC singing competition where they fell in love on the set two years ago.

Shelton exclusively opened up to PEOPLE about teaming up with the former No Doubt rocker on the track, saying Stefani called him while he was on the road one day to tell him about writing the song.

“She was so excited,” said Shelton. “I love seeing her that happy. She’s so happy when she’s writing and just hearing that in her voice and how into it she was, I just couldn’t stop thinking about [it] so I got my guitar out and thought, ‘I wonder if I could help her in some way?’”

After writing the melody for the chorus and coming up with some lyrics, Shelton sent her his portion of the song — and it ended up being the first verse. 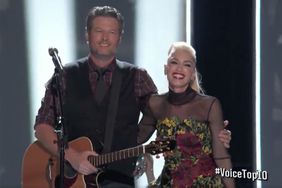