Blake Shelton and Gwen Stefani's newlywed life is hitting all the right notes.

On Thursday, radio station Katy Country 93.1 shared a video on Facebook of the couple performing at 45-year-old Shelton's Ole Red restaurant in Tishomingo, Oklahoma. The Voice judge and Stefani, 51, gave a free, public concert together, in an intimate, acoustic performance for local fans.

The first song the two performed was their 2020 collaboration "Happy Anywhere," featured on Shelton's album Body Language. They followed up with a rendition of their duet "Nobody But You," which the country star released in December 2019 on his album Fully Loaded: God's Country.

And more music from the couple is on the way. Following their July 3 nuptials at Shelton's ranch in Oklahoma, the stars returned to their home in Los Angeles to tend to their respective careers.

"They're both very, very busy this year with work, and this was the only time they could fit in the wedding," a source close to the couple told PEOPLE for this week's issue.

Stefani is working on her fifth solo album and preparing for her Las Vegas residency that returns in the fall. Meanwhile, Shelton is busy filming as a coach on season 21 of The Voice and preparing to hit the road on his Friends and Heroes tour in August.

By all accounts, the country star and the No Doubt rocker's wedding was pretty magical.

Stefani and Shelton said "I do" in a backyard chapel on his ranch, cheered on by an intimate group of 40 of their close friends and family members, including Stefani's sons (with ex Gavin Rossdale), Kingston, 15, Zuma, 12, and Apollo, 7, and longtime pal Carson Daly, who officiated.

Now, as Stefani and Shelton look forward to their future, "they seem extremely happy," said the Stefani source.

Another industry insider added: "They are both inspired with their lives in every way." 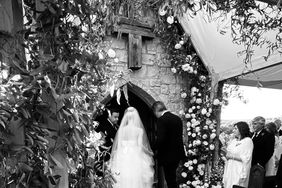 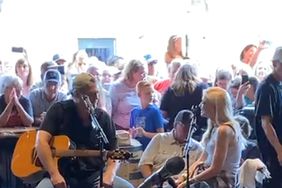