Cardi B won the Grammy for best rap album on Sunday, and Ariana Grande was disappointed her late ex-boyfriend lost while his parents were in the audience

Cardi B thanked Mac Miller after she took home the Grammy for best rap album during Sunday night’s ceremony.

Miller, who died five months ago from an accidental overdose at the age of 26, was nominated in the same category for his fifth and final studio album, Swimming, which lost to Cardi’s Invasion of Privacy — after the Recording Academy invited Miller’s grieving parents to attend the awards show.

After Cardi’s win, Miller’s ex Ariana Grande shared her frustration about Miller’s loss on Twitter, later clarifying that she wasn’t upset at Cardi, but at the Recording Academy for inviting Miller’s parents to watch him lose.

In an Instagram video where she thanked various people, including her family, team and fans, Cardi, 26, also shouted out the late rapper.

“I read an article that Mac Miller’s family said that if he don’t win, they want me to win so I’m sharing this Grammy with you mother f—er. Rest in peace,” she said, then sharing a screenshot of the article to her Instagram.

Grande, 25, commented with six black hearts on the rapper’s post to show her support.

Though he did not win, Miller was honored during the In Memoriam segment of the show. His parents, Karen Meyer and Mark McCormick, were also in attendance — and it’s their presence that most upset Grande.

The singer tweeted, “f—” and “trash” during the show, later clarifying that she was not referring to Cardi.

“Nothing to do w her. good for her. i promise. i’m sorry,” she wrote on Twitter.

Grande told fans in another message: “She’s not at all and that’s not what i meant and u know that.”

A source confirmed to PEOPLE, “It has nothing to do with Cardi,” adding that Grande “was very upset” that Miller lost when the Grammys invited his parents attended the show.

All of these tweets have since been deleted.

Cardi took home the Grammy for best rap album at Sunday’s ceremony for Invasion of Privacy, beating out some of hip hop’s biggest stars for the coveted honor. She became the second female artist to win the award after Lauryn Hill won with the Fugees in 1997.

The rapper looked shocked when her name was read and finally came onstage with husband Offset, 27, by her side. The two confirmed their reconciliation on the carpet before the show after separating late last year.

“Babe, I can’t breathe. Oh my goodness, whoa child. I’m sorry,” she said with Offset beside her. “I’m sorry, I just, whoa — the nerves are so bad. Maybe I need to start smoking weed.”

Nervous Cardi B Brings Offset Onstage to Accept Rap Album Grammy: ‘The Nerves Are So Bad’

She continued, referencing her baby girl, 7-month-old Kulture Kiari, “I wanna thank my daughter. Not just because she’s my daughter, it’s because when I found I was pregnant, my album was not complete … we was like, ‘We have to get this album done so we can shoot these videos while I was still not showing,’ and it was very long nights.”

She also thanked her husband. “Nah, ’cause seriously he was like, ‘You gonna do this album, girl. We gonna have this baby and we gonna make this album.'” 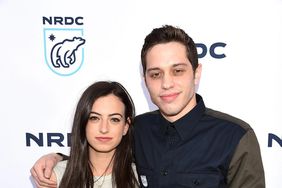 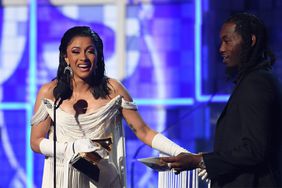 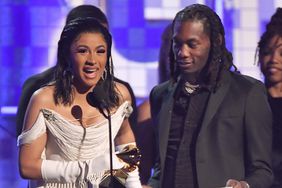 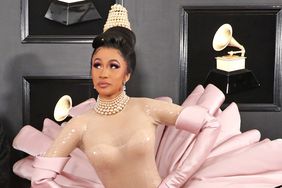 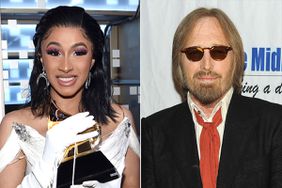 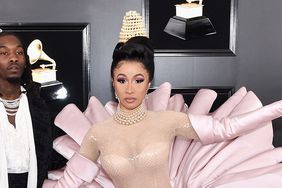 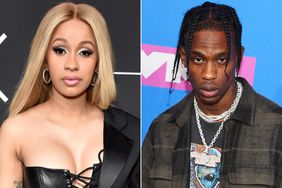 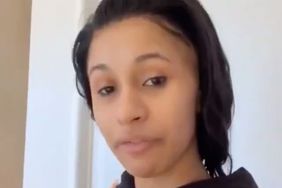 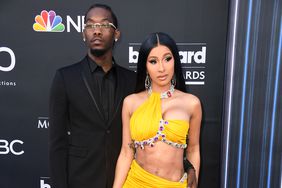