Laverne Cox Apologizes for Not Mentioning Metallica During Their Grammys Intro

As the actress introduced Lady Gaga and Metallica onstage at the Grammy's, she forgot to mention one little thing

Laverne Cox is feeling the wrath of die-hard Metallica fans.

While introducing them onstage of the Grammy Awards on Sunday night, the Orange Is the New Black actress made a major error in solely introducing Lady Gaga — who was performing with the legendary rock band — and not even mentioning the name of the rock group.

While she might have mentioned the number of Grammy awards Metallica has accumulated over the long career, fans of the group were quick to send their thoughts on Twitter, causing Cox, 32, to apologize twice on her account.

The Doubt star didn’t let the backlash get to her though, as she soon met her idol, Beyoncé. She quickly took to Instagram to show her dream come true.

“This finally happened,” she wrote. “I was so beside myself with joy, wonderment and awe of the majestic that is the queen I forgot to hold in my stomach and give you face. But I met #QueenBey y’all. #Grammys.”

Cox grew so excited, she decided she’d show more proof that the encounter occurred at all.

“More receipts that this happened,” she wrote. “Lord have mercy. #beyonce @beyonce #QueenBey and me. She touched me. Lord! #Grammys #grammys2017.” 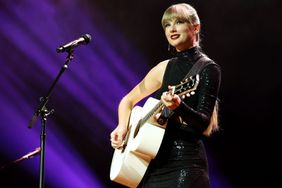