"This pain should never be felt by anyone over a loved one attending a live concert," said Chris Hilgert, John's father

The family of John Hilgert, the 14-year-old high school freshman who died at the Astroworld festival, have filed suit against Travis Scott and others — and are demanding "changes."

The complaint, which was filed on Wednesday and obtained by PEOPLE, lists Scott, 30, Live Nation Worldwide and its subsidiaries including Scoremore LLC, as well as other entities.

The suit argues the defendants "failed in their duty to protect the health, safety, and lives of those in attendance at the concert" and singles out what the plaintiffs describe as security and crowd control failures.

The suit also alleges that "gross negligence" and "reckless disregard" for Hilgert's safety — who is named as J.W.H. in the court papers — resulted in "his injuries and subsequent death."

"Defendants egregiously failed in their duty to protect the health, safety, and lives of those in attendance at the concert, including but not limited to the failure to provide adequate security personnel to implement crowd control measures, proper barricades, and the failure to provide a sufficient amount of emergency medical support," the suit contends.

John's parents, Chris and Nichole Hilgert, say they want to see reforms made in the way concerts are organized, from security requirements, medical facilities available and the elimination of poorly designed general admission seating instead of assigned seats, according to a press release.

"The pain of our loss from our son John not making it home alive from an event such as this is intolerable. He was a beautiful young man who simply wanted to enjoy his first concert event with friends, whom he treasured spending time with more than anything else," Chris said in a statement.

"This pain should never be felt by anyone over a loved one attending a live concert," he said. "Our sole aim in filing this lawsuit is to prevent this type of tragedy from ever happening again at a live concert. There is no excuse for the poor crowd design, event execution and lack of response that was exercised at this festival that resulted in the tragic death of our son and nine others along with scores of other people that were innocently injured."

He added, "If this lawsuit prevents even one family from having to go through the extreme pain and anguish that we have endured, then it is the least we can do to honor John's memory."

Richard Mithoff, the family's attorney, also filed a lawsuit on behalf of Adam and Jennifer Cox, parents of John's friend with whom he attended the festival and who is named in the suit as B.C.

The other boy was also injured during the festival crowd surge, according to the family. Both suits claim negligence and gross negligence on the part of all of the defendants and are seeking $1 million in damages.

"No one should die going to a concert," Mithoff said in a statement.

A number of suits have been filed in connection with Astroworld chaos.

On Nov. 17, Scott was named in a $750 million complaint on behalf of 125 Astroworld festival victims including the family of 21-year-old Axel Acosta, who died after cardiac arrest from being crushed in the crowd.

In an earlier statement, Live Nation said they "continue to support and assist local authorities in their ongoing investigation so that both the fans who attended and their families can get the answers they want and deserve, and we will address all legal matters at the appropriate time."

Meanwhile, earlier this month, Scott's lawyer, Edwin F. McPherson appeared on Good Morning America and said that there "obviously was a systemic breakdown that we need to get to the bottom of before we start pointing fingers at anyone."

McPherson claimed then that the mass casualty declaration made by authorities that night "absolutely did not" make it to the 30-year-old rapper or his team as the artist kept performing the show. "In fact," McPherson insisted, "we've seen footage of police half an hour later just walking about and not looking like it was a mass casualty event."

Following the event, Scott posted a series of videos to his Instagram Story on Nov. 6, saying he was "horrified" by what happened at his show and pledging to help the victims' families. "I'm honestly just devastated and I could never imagine anything like this happening," Scott said then.

A source close to the musician previously told PEOPLE that Scott was unaware of the magnitude of the situation while onstage. "The lights were shining in his eyes and he couldn't see what was happening," the source said. "He thought someone had just passed out, which happens during concerts."

This week, Scott was spotted in public for the first time since the festival tragedy. The rapper was was photographed spending time with Mark Wahlberg, Corey Gamble, and Michael Jordan in Southern California. 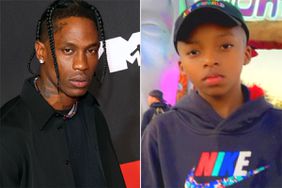