The legacy of the King of Rock n' Roll lives on

Let's Have 'A Little Less Conversation'

Hello? You want to see more photos of Elvis Presley in honor of the new film Elvis? Say no more!

The Boy from 'Way Down' South

Born in Tupelo, Mississippi, to Vernon and Gladys Presley, Elvis was actually meant to be a twin, but his brother, Jesse, was stillborn. Elvis's name would become synonymous with Tennessee, but he wouldn't move to Memphis — where he got his start — until 1948.

The Singer's 'Always on My Mind'

Presley got his first guitar as a birthday present when he was just 11 years old.

'Darling, So It Goes'

You might not believe it, but the man who is now one of the world's most recognizable musicians failed his high school music class.

You 'Can't Help Falling in Love'

In 1954, Presley released his debut single, "That's All Right" The song — which became a huge hit — was originally by blues singer Arthur Crudup.

Singing 'A Mess of Blues'

The handsome singer would go on to amass 114 Top 40 hits and win three Grammy Awards over the course of his career.

Buying His Own 'Heartbreak Hotel'

According to the estate's website, Presley purchased Graceland in 1957 for just $102,500. Here's a photo of him that year in front of the mansion that would become his iconic compound. He was just 22 years old.

Fun fact: The King's famous, jet-black hair is actually naturally blond. He started dying it black when he was in high school and kept up the color throughout his life.

Before Shakira's hips didn't lie, Elvis's pelvis was the only thing anyone could talk about.

Here, he performs on The Ed Sullivan Show in 1956. Sullivan initially thought the singer's dance moves were too inappropriate for family television, but changed his mind after seeing his competitor's ratings. Elvis was then booked for three performances.

After this performance in October 1956, viewers were so offended by his dance moves that, for his third appearance on the show, he was only shot from the waist up.

And 'Don't' Forget This Iconic Moment

Even though all anyone could talk about were his hips, Elvis did whole lot more than just pelvic thrusts on Sullivan; he actually received a polio vaccine on live TV when he visited.

CNN reported that the singer's decision to get the vaccine on live television — particularly as a young, healthy celebrity — may have been a catalyst in getting younger adults to understand the importance of the shot.

Excuse Us, But 'Are You Lonesome?'

"We don't want a four-leaf clover," we just want young Elvis Presley to be our "Good Luck Charm."

The King of Rock n' Roll also reigned on the silver screen: he starred in 31 feature films. This still is from 1957's Jailhouse Rock.

Someone's got a 'Suspicious Mind'

Here he is filming King Creole, the last movie he'd star in before being drafted into the Army in 1957.

In 1957, Presley was drafted into the U.S. Military. Then just 23, the superstar finished up filming King Creole before he was inducted into the Army as a private in March 1958. His first film upon his return was, fittingly, G.I. Blues.

While stationed abroad in Germany in 1959, Presley met his future wife, Priscilla. The pair married in 1967.

'The Wonder of You'

On top of all of that acting, Presley managed to record 57 records (some of them were soundtracks from his films) in his lifetime.

'(Let Him Be Your) Teddy Bear'

When Elvis sang, "Baby let me be your loving teddy bear," he obviously meant it.

More Than Just a 'Hound Dog'

If there's one thing we're not on the fence about, it's the King's undeniable mark on pop culture. 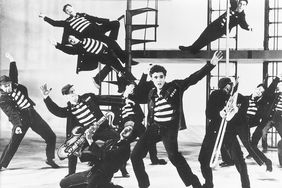 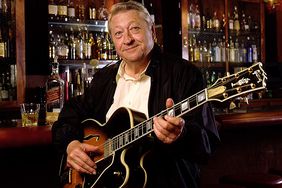