The pop singer was driving down the A40 in west London when a Royal Mail truck struck a black Volkswagen, dramatically pushing it sideway down the highway

Pop singer Ellie Goulding has revealed how she came to the rescue of a motorist in London whose car was struck by a large Royal Mail truck — then dramatically pushed sideways down a busy highway.

The singer — who was recently called “Dearest Friend” by Princess Beatrice during a Saturday night TV show— was driving down the busy A40 in west London on Monday when the incident happened to the left side of her own vehicle.

Dramatic footage taken by another car driver shows the red truck traveling down the fast lane of the highway with a black Volkswagen trapped under its front bumper.

With the Volkswagen’s wheels screeching and other drivers leaning on their car horns, the Mail truck eventually comes to a halt beside a black Land Rover. Some road users then roll down their windows and shout at the driver, “What are you doing, man?”

Goulding, 32, appears on the road moments later wearing a black bodywarmer and matching leggings, while a man with a tan-colored jacket talks to the shocked driver of the VW.

“I didn’t see him,” protests the Mail driver, as the car’s occupant patiently sits behind the wheel — because of the position of the truck he’s unable to get his door open and escape.

“There’s no need to film it, sir,” Goulding says to a fellow motorist, who tells her it’s for “police evidence.”

The Mail driver then emerges to talk to the car owner, saying that he can explain what happened on the side of the road, adding once again, “I couldn’t see you.”

At this point, Goulding — who married longtime love Caspar Jopling at historic York Minster in August — leans into the car to talk to the driver.

“I’m the one in the car checking if this guy was okay,” Goulding later posted on Twitter, adding that it was the “craziest thing I’ve ever seen on the road.”

She continued, “Everyone was driving past but my driver Guy stopped. Drive safe and look out for others everyone!!”

In a second post, the singer added “On a side note, I can’t believe the first instinct of the other drivers who got out was to instantly start filming on their phones and shout abuse at the poor shocked driver, not even checking the other driver was OK. What on Earth :-(“

A Royal Mail spokesperson told PEOPLE: “We are very concerned about this incident. We are relieved that no one was hurt. We are investigating as a matter of urgency.”

In Disaster's Wake, An Expert Warns of America's Aging Bridges: Cross at Your Own Risk 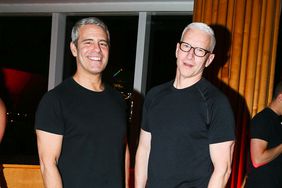