Meet Elizabeth Chan, the "Queen of Christmas" who only writes and records songs dedicated to her holiday

Elizabeth Chan has recently become known by some in the music industry as the "Queen of Christmas" because she is quite literally the most prolific songwriter in the Christmas music genre.

She's so dedicated to the genre that she even quit her corporate job in 2010 to focus her career on penning Christmas tracks — a decision her immigrant parents were first horrified by.

Chan's second career as a Christmas songwriter kicked off with a few thousand dollars funded on Kickstarter that helped put forth her debut LP Everyday Holidays in 2011, which garnered her first of several top 10 Billboard hits. Now, her songs are listened to by millions throughout the world during the holiday season.

In October, Chan, who had a new baby during the pandemic and is mom to a toddler, released her ninth album of pure Christmas music called Celebrate Me Home.

"2020 has taught us what really matters and has shown me there is a lot to celebrate this holiday season!" she wrote on Instagram announcing her album. "I hope you guys love it as much as I do!!"

Its first single, also titled "Celebrate Me Home," is a re-interpretation of a Kenny Loggins song of the same name, and is about the desire to be with friends and family again for the holidays after nearly a year of social distancing. (The songs has already reached No. 5 on the holiday music charts.)

"I've never been this open and personal in a music video before, but 2020 was a different year," Chans said in a statement. "My family had gone through a rollercoaster of emotions while in quarantine as our family was directly affected by COVID-19."

"Despite all the fear and challenges, we started to appreciate our time together," she added. "I wanted to commemorate and celebrate this year of us being together at home."

This video marks the first time Chan has shown her family on-camera.

"My heart, my soul and everything that I am is reflected in my lyrics and art—but I've never reflected them in my videos," says Chan.

"It was definitely a gut-check decision to decide to turn the camera on my husband, daughter and new baby," she added. "My year has been so much about them, I couldn't share my year with everyone without sharing my family." 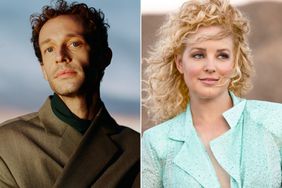