Ed Sheeran Opens Up About His A-List Pals, from His Clapton Collab to Taking Shots with Beyoncé ('She Was So Confused!')

Since breaking out in 2011, Ed Sheeran has rubbed elbows — and collaborated — with seemingly everyone in music. Back with his chart-topping third album ÷ (which debuted at No. 1 on the Billboard 200), Sheeran sat down with PEOPLE to discuss his new album. Naturally, his famous friendships popped up throughout the interview.

Below, the 26-year-old “Shape of You” singer, who kicks off his North American tour in June, opens up about his A-list pals and collaborators, from Tay(lor Swift) to (Jay) Z!

Between industry events and award shows, Sheeran has gotten to know the former child star over the years — and Bieber even recorded a track Sheeran penned for his smash album Purpose: “Love Yourself,” which peaked at No. 1 on the Billboard Hot 100 and scored two Grammy nominations.

Despite the song’s success, Sheeran says he has no regrets giving it up.

“None at all,” he tells PEOPLE. “I don’t think it would have been as big if I’d have put it out. The zeitgeist around Bieber at that time: It was him coming off a load of negative press and having to prove himself again and making mature music that he really, really was behind, as well. It was all about the time with that song. If anyone else had sung that song at a different time, it wouldn’t have been as big of a hit. I kept being like, ‘D’you reckon it’ll be a single?’ And then it just suddenly was the biggest song in the world. It really took me by surprise, that one.”

Sheeran and Bieber, 23, have hung out since the song took off, recently enjoying a round of golf while they were both in Japan.

“He’s so different now. He’s completely sober, clean, just drinks water — friendly, smiley. It’s a completely different person. It’s really, really nice to see,” says Sheeran of the tabloid-fueling pop star. “If you’re followed around 24/7 with a camera, they’re going to catch every moment of you, and not every human is perfect. We all make mistakes, and I think it must have been very tough being 17 and having a flashing camera in your face 24/7. He’s someone who’s definitely figured out the balance now.”

Sheeran says Queen bey is one of his dream collaborators.

“After having sung with Beyoncé, I’d say she’s always top of my list. Even just standing near her onstage makes me look better — just because she’s really that amazing. She has this aura around her of just talent,” he says of the “Formation” singer, 35. “Rehearsing with her, hearing her sing up close is just a thing to marvel. Even if my career ended tomorrow, I’ll still be able to tell my grandkids that I got to sing with Beyoncé. She will be remembered as one of the greats.”

For more on Ed Sheeran, pick up the latest issue of PEOPLE, on newsstands everywhere Friday.

In 2015, Sheeran got the opportunity to sing with the diva twice, at the Grammys’ Stevie Wonder tribute then again at the Global Citizen Festival. And over time, he’s gotten to know both Bey and husband Jay Z in more intimate settings.

“I always had opportunities to meet Jay Z, and in my mind, I never want to meet someone and just shake hands and get a selfie,” he says. “I want to meet someone for the first time and have a really intelligent conversation about music. So I held out with Jay Z, and the first time I met him, he came up to me and said, ‘Hello, really nice to meet you. Should we go to dinner and chat?’ That’s a rule I’ve had for every single musician that I’ve admired.”

A few years back, Sheeran even found himself grabbing pizza and shooting Jägerbombs with the power couple!

“She was so confused — so confused!” Sheeran recalls of the Lemonade chanteuse taking the Redbull-Jägermeister concoction.

As for what the famous pair is like out in the wild?

“I had the thing in my mind where you just assume something,” he says of his preconceived notions of the couple. “And then they’re so human and lovely and nice and normal and talk about normal things and do normal things. It was being invited into a world that you were kind of scared to enter into, and then you just realize: They’re a very, very loving couple, and it’s obviously a world that’s filled with love and respect, and it’s lovely to see. I feel like the media and the public see one thing, and what it actually is, it’s a really cool thing. And they’re really nice people.”

Sheeran says his biggest pinch-me moment was befriending — and going into the studio with — his idol, fellow Englishman Eric Clapton.

“I sang on Eric Clapton’s album,” Sheeran confirms to PEOPLE. “He’s the reason I started playing guitar. It’s one thing having him on mine, but being his, that’s an honor that you can’t ever pinpoint on how great that is. That was really cool.”

Online speculation ran rampant that Sheeran and Clapton, 71, worked together since the Cream veteran released his latest solo album last May. And Sheeran previously remained coy about their joint creative endeavors.

As for how Sheeran and Clapton got to know each other?

RELATED VIDEO — FROM COINAGE: What Is The Grammy Bounce? (No, It’s Not A Dance Move)

An O.G. squad member, Sheeran has seen it all with longtime pal Swift. The pair cracked the Top 40 with their 2014 folk-pop ditty “Everything Has Changed,” and Sheeran says another collaboration is a no-brainer.

“That will definitely happen again,” he says. “We’ve both got two totally different paths at the moment, but it’s always spoken about, and eventually — there’s no real rush.”

As for a new album from Swift, who hasn’t released an LP since her 2015 smash 1989, Sheeran says we’ll have to wait for that, too.

The friends have been known to celebrate holidays together over the years. And Sheeran and his girlfriend, risk advisory consultant Cherry Seaborn, 24, actually spent their first date together at Swift’s 2015 4th of July party.

“It’s just a load of like-minded people that you would never expect to see in the same place, together,” Sheeran says of the star-studded fêtes. “I found myself chatting to Ryan Reynolds for a long time, and I did not expect to see him there. [Taylor]’s kind of a magnet for like-minded people, and they’re always super-sweet. Anyone that’s around her is very, very nice. It’s a fun party. But it’s a lot of stories. You walk in, and you’re like, ‘Holy f—! I know everyone in here!’ It’s cool.” 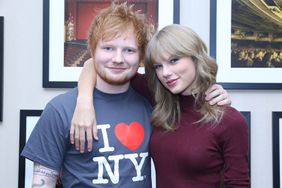