Diplo has released new music with the Jonas Brothers!

Poking fun at how Diplo, 40, livestreamed Joe, 29, and Sophie Turner‘s Las Vegas wedding earlier this year, the music video follows the deejay’s persistent attempt to contact Joe and apologize for ruining his and Sophie’s private moment.

Each time Diplo tries to text, call or FaceTime Joe, he is quickly denied. He even goes to extreme lengths to speak with the singer by contacting Nick, 27, and Kevin, 31, in hopes they’ll answer and by sending Joe a chocolate fruit arrangement with a message that reads “Call me back,” signed “Thomas Wesley (Diplo)”.

By the end of the video, the brothers decide to give into Diplo’s request and FaceTime the DJ. However, just as he’s about to answer their call, Diplo’s phone dies — and with that, the video ends.

This marks the first time any Jonas brother has collaborated with Diplo, who in April announced the launch of his new country project under his birth name. His first song under the moniker, “So Long” with Cam, was released in May, while the second, “Heartless” with Morgan Wallen, dropped in August.

The midnight premiere of “Lonely” comes one day after Diplo appeared to hack the Jonas siblings’ Instagram account and trolled his pals with a variety of silly posts on their main feed and Instagram Story.

The Instagram takeover led up to both Diplo and the band sharing a video teasing their new collaboration along with the caption, “lonely. 12am et.” In the teaser clip, Diplo and the brothers can be seen looking at their phones in separate shots, seemingly all by themselves.

Diplo first teased the collaboration with the Jonas Brothers in June, telling Ryan Seacrest on his radio show that there had been something in the works.

“I have some songs I’m doing with the Jonas Brothers and I’m friends with them,” Diplo said. “We have a song coming out later this summer, me and them — I’ve been working on some weird stuff, I’ve been doing country music — so it’s kind of a country vibe with them.”

While the interview came weeks after Diplo livestreamed Joe’s surprise Vegas wedding to Turner, which Joe jokingly said the EDM hitmaker had “ruined”, Diplo was also invited to the couple’s second wedding in France in June.

He later joked that the pair had confiscated his phone to keep their nuptials a little more private. 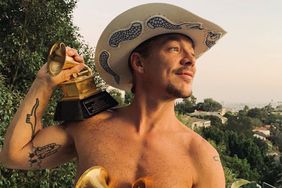