Chuck Berry, the Father of Rock and Roll, Has Died at 90

Legendary musician Chuck Berry has died, police confirm. He was 90.

The St. Charles County Police Department in Missouri confirmed on Facebook that they responded to a medical emergency on Saturday afternoon where they found an unresponsive man.

“St. Charles County police responded to a medical emergency on Buckner Road at approximately 12:40 p.m. today (Saturday, March 18),” the police department said in a statement. “Inside the home, first responders observed an unresponsive man and immediately administered lifesaving techniques. Unfortunately, the 90-year-old man could not be revived and was pronounced deceased at 1:26 p.m.

“The family requests privacy during this time of bereavement.”

On Saturday evening, the family posted on Berry’s official Facebook page. “We are deeply saddened to announce that Chuck Berry – beloved husband, father, grandfather and great-grandfather – passed away at his home today at the age of 90. Though his health had deteriorated recently, he spent his last days at home surrounded by the love of his family and friends,” they wrote. “The Berry family asks that you respect their privacy during this difficult time.”

With a litany of hit singles such as “Maybellene,” “Roll Over Beethoven,” “Brown Eyed Handsome Man,” “Johnny B. Goode,” “School Days,” “Nadine” and “Rock and Roll Music,” Berry is credited with reshaping rhythm and blues into what we now recognize as rock and roll. His lyrics explored teen life and American commercialism, and his music fused exciting guitar solos with flare and showmanship.

”By adding blues tone to some fast country runs, and yoking them to a rhythm-and-blues beat and some unembarrassed electrification, he created an instrumental style with biracial appeal,” explained famed rock critic Robert Christgau.

Born Charles Edward Anderson Berry on Oct. 18, 1926 in St. Louis, Missouri, Berry was one of six children born to his father Henry, a contractor and deacon, and his mother, Martha, a public school principal. He was raised in a neighborhood known as The Ville, which was a mostly middle class area at the time. He was fascinated with music from an early age, and gave one of his first public performances in 1941 while still a high school student.

Berry served the first of his three infamous prison terms while still a high school student in 1944. At the age of 17, Berry and two friends decided to drive to California on a whim, carrying a broken down pistol he had found in a used car lot. The gun was useless, Berry later said, but it looked real enough to assist them in a robbery spree which included a bakery, barber shop and clothing store in Kansas City. They also used the gun to steal another car after their ride broke down in Columbia, Missouri. They were eventually arrested by a highway policeman and were held in a county jail for a month before standing trial. They were sentenced to 10 years each.

”As Berry tells the tale, their crime spree was nothing more than adolescent high-jinks; like much of what was to happen later in his life, however, the incident was not without ambiguities,” writes Bruce Pegg, who wrote the Berry biography Brown Eyed Handsome Man: The Life and Hard Times of Chuck Berry.

“Berry’s actions were clearly dangerous and antisocial; at the same time, his legal advice (such as it was), trial and sentencing were infused with the racism one would expect of a rural Missouri court in the 1940’s,” adds Pegg. Despite his clean record, Berry was given a maximum sentence.

Berry was released at 21, and seven months later, he met Themetta “Toddy” Suggs and married her after five months of dating. Two years later, Toddy gave birth to Darlin Ingrid Berry on Oct. 3, 1950. Berry took up a series of jobs, first as a factory worker, then as a janitor and even took classes to train as a beautician. By 1950, he had saved up enough money to buy his family a home.

At the same time, he was playing with local bands in St. Louis for an extra flow of income. Around this time, he was combining the blues music he had played since he was a teenager, while borrowing techniques and tricks from blues legend T-Bone Walker. His guitar lessons from friend Ira Harris began to shape his style with the instrument. By 1953 he was playing with Johnnie Johnson’s trio, and began incorporating the country sound that would lend to his appeal with white audiences.

”When I played hillbilly songs, I stressed my diction so that it was harder and whiter. All in all, it was my intention to hold both the black and the white clientele by voicing the different kinds of songs in their customary tongues,” Berry said, according to the New York Times.

Around this time, Berry began incorporating his famous duck walk into his act. The duck walk was an old inside joke with his family from his childhood. According to Berry, a ball he was playing with as a kid rolled under a kitchen table where his mother and her church friends were sitting. Jokingly, he crouched down, knees fully bent, and with his head and back straight, he scooted under the table to get the ball. His mother got a kick out of it, asked him to repeat the waddle again and the duck walk was born.

A breakout moment in Berry’s career occurred during a fateful meeting with one of his idols. By 1955, Berry had taken over his friend Johnnie Johnson’s band and was looking to score a record deal. That’s when he met Muddy Waters during a visit to Chicago. When Berry asked his idol who to see about making a record, Waters told him to look up Leonard Chess. Not long after his first meeting with Chess Records, Berry put the record “Maybellene” on wax.

It was recorded in July, and was No. 1 on the Billboard‘s R&B chart by September, while showing promising crossover appeal to the pop charts. A line of hit singles followed, including ”School Days,” ”Sweet Little Sixteen” and ”Johnny B. Goode.” Berry continued to marry lyrics relatable to white teens with black R&B and country music, creating a sound popular with all cultures, not unlike Elvis Presley. “I made records for people who would buy them. No color, no ethnic, no political — I don’t want that, never did,” he once said.

His second and most devastating brush with the law occurred in January 1962, when he was sentenced to three years in prison for violating the Mann Act. He was charged with transporting 14-year-old Janice Norine Escalanti across state lines and sentenced to three years. Despite a difficult prison sentence, Berry used his time to complete his high school education and write a couple of songs: “Nadine” and “You Never Can Tell.” But on the outside, bands like the Rolling Stones and the Beatles were taking the world by storm with the music Berry had helped create.

During the 1970s, Berry’s career began to slow. While he was touring with cover bands of varying quality, performers like Eric Clapton and Jimi Hendrix were taking his music to new heights and unfamiliar directions.

More legal troubles again derailed Berry’s success. After a five-year probe, the IRS indicted him in 1979 for evading taxes and filing false returns. He accepted a plea bargain and was sentenced to 120 days in federal prison, 4 years probation and 1,000 hours of community service.

The 1980s and 1990s were roller coaster decades for the rock legend. He was arrested in 1987 on assault charges at the Gramercy Park Hotel in New York, where a woman said he had beaten her up. He eventually pleaded guilty to harassment, and was fined $250.

He was sued by a group of women in 1990 who claimed that he had videotaped them in the bathroom of a restaurant he owned in St. Louis. His biographer Pegg estimated that it cost him $1.2 million as well as hefty legal fees to reach a settlement. His lawyers said he had been the victim of a conspiracy to profit from his wealth.

Berry faced legal problems again in 2000, when his former bandmate and pianist Johnnie Jonhson sued him, claiming that he co-wrote over 50 songs, including “No Particular Place to Go”, “Sweet Little Sixteen” and “Roll Over Beethoven”, all of which credit only Berry. The case was ultimately dismissed, with the judge ruling that too much time had passed since the songs were written.

By 2008, Berry was still touring at the age of 82. He toured Europe, stopping in Sweden, Norway, Finland, the United Kingdom, the Netherlands, Ireland, Switzerland, Poland and Spain. That year he also played at the Virgin Festival in Baltimore, Maryland. In 2011, he had to helped offstage after suffering from exhaustion. Up until 2014, Berry was still playing at the Blueberry Hill, a restaurant and bar in St. Louis, where he had been playing on Wednesdays since 1996.

Recently, on his 90th birthday, Berry announced plans for a new studio album, his first since 1979. The album, titled Chuck, will be released this year. It features his children, Charles Berry Jr. and Ingrid, on guitar and harmonica, and is dedicated to his wife of 68 years, Themetta Berry. 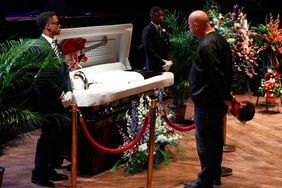 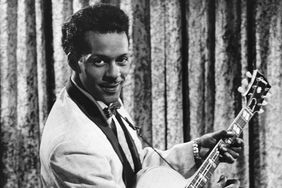 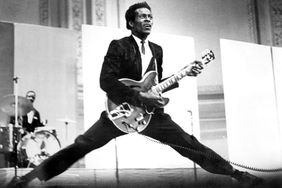 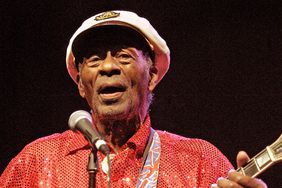 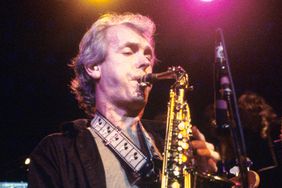