On Thursday and Saturday, Rihanna, 30, posted seductive snapshots from a bed to promote her Savage X Fenty lingerie line. Brown, 29, commented on both pictures with the face-flushed emoji — even leaving two emojis on one of the photos.

Brown’s comments caught social media users’ attention because of Brown’s violent past with the pop star. In February 2009, Brown physically assaulted Rihanna the night before the Grammy Awards. Months later, he was sentenced to five years probation and 180 days of community labor.

Rihanna appeared to respond indirectly to Brown’s comments via her Instagram Story.

She posted a screenshot of an excerpt from the Bible that included the phrases “You do not have to go backward” and “I am going to stand strong in the power of God until He delivers me,” according to a screenshot captured by Elle.

Fans expressed their own opinions about Brown’s comments. One replied to him, “You are not a man. You’re just a shame. Go away.” Another wrote in all caps, “GET AWAY FROM HER.”

Brown has surprised fans by remarking on Rihanna’s Instagram before: In August 2017, he dropped an emojis of eyes looking to the side in the comment section of a photo of Rihanna in a sparkly outfit in Barbados.

RELATED VIDEO: Rihanna Is a Vision in White at Her Annual Diamond Ball

That same month, Brown discussed his assault of Rihanna in Chris Brown: Welcome to My Life.

In the documentary, Brown said that Rihanna got upset when a woman with whom Brown had previously had sex came up to them and when Rihanna spotted a text from the woman on Brown’s phone.

“She starts going off, she throws the phone,” he said. “‘I hate you.’ Starts hitting me. … She hits me a couple of more times and it doesn’t go from translation to ‘Let’s sit down, I’m telling you the truth.’ It goes to, ‘Now, I’m going to be mean, be evil.'”

“I remember she tried to kick me, but then I really hit her, with a closed fist, I punched her. I busted her lip,” Brown continued. “When I saw it, I was in shock. I was like, ‘F—, why the hell did I hit her?’”

He claimed that he “felt like a f—ing monster” when he abused her. 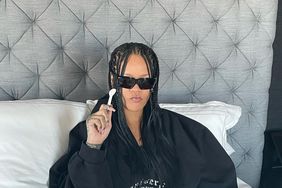 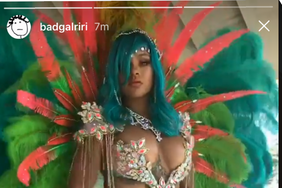 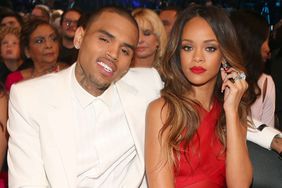 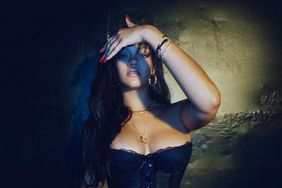