Carrie Underwood has released the first single from her forthcoming sixth studio album.

The singer, 35, debuted her new song “Cry Pretty” early Wednesday, marking her first lead single from a music project since “Dirty Laundry” from the 2016 album Storyteller. (She previously released the promotional single, “The Champion,” in January which was recorded to serve as the opening theme for NBC’s broadcast of Super Bowl LII.)

An emotional ballad, the tune features Underwood singing about those moments in life when one finally hits a wall and falls apart.

“You can pretty lie / And say it’s okay / You can pretty smile / And just walk away / Pretty much fake your way through anything / But, you can’t cry pretty,” she sings.

“Cry Pretty” was co-produced and written by Underwood in collaboration with the Nashville songwriting team, the Love Junkies: Hillary Lindsey, Liz Rose, and Lori McKenna.

On Monday, Underwood announced the title and cover art for “Cry Pretty” in a blog post on her website, and revealed that “Cry Pretty” references some events from the past year.

“The title refers to when emotions take over and you just can’t hold them back. It really speaks to a lot of things that have happened in the past year and I hope when you hear it, you can relate those feelings to those times in your life,” Underwood explained. “It’s emotional. It’s real. And it ROCKS!”

In addition, Underwood informed fans that “Cry Pretty” would not be the only new music fans can look forward to.

“I’ve been in the studio writing and singing a TON, but I’ve also been able to be creative in a way that I’ve never been before, which has been very fulfilling and empowering,” the mother of one wrote.

“While I was writing last year, I met a writer/producer named David Garcia. We hit it off in a big way and I’m excited to say that we are co-producing my album together. I’ve always been lucky to have a voice in the writing and recording process, but this is the first time I am this involved in the production of my music,” Underwood continued.

“It’s been challenging and incredibly rewarding to be involved in every aspect from start to finish. David has been an amazing teacher and partner, and I’m so proud of what we have created,” she shared, adding that “Cry Pretty” is a “song I love so much.”

On Sunday, fans will be able to sing along with Underwood as she will be performing the single at the ACM Awards. The awards show will mark the American Idol winner’s first stage performance since her November accident which she suffered multiple injuries, including a broken wrist and damage to her face that resulted in 40 to 50 stitches. 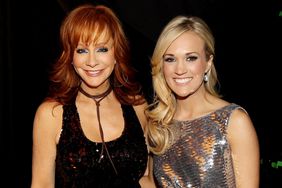