The "Havana" singer, 24, put her own spin on "I'll Be Home for Christmas" during the NBC special Michael Bublé's Christmas in the City, adding a Mariachi band as a way of paying tribute to her Mexican roots.

"I wanted to pay tribute to my Mexican heritage with this Christmas cover of I'll be home for Christmas," she wrote on Instagram. "Luis [Miguel] did it first and in Spanish, but I wanted to bring it to an audience that normally doesn't get to hear the beauty of Mariachi music."

In Spanish, she added: "Much love to Mexico and to the beautiful music of my country. Merry Christmas! I hope you enjoy this cover that's now available on Amazon Music."

During her performance, a Mariachi band wearing sparkly white sombreros backed her up with both instruments and vocals on the song, a classic that was first recorded in 1943 by Bing Crosby.

After nailing the track in a dress featuring a white blazer top and a sheer black skirt, Cabello and host Bublé shared a little dance and hug onstage at Rockefeller Center's Studio 8H.

In addition to the Fifth Harmony alum, Bublé also shared the stage with stars like Leon Bridges, Jimmy Fallon, Hannah Waddingham and Kermit the Frog during the special, which aired on Monday night.

This isn't the first time Cabello performs with a Mariachi. She also performed unreleased "La Buena Vida" with a Mariachi band for her NPR Tiny Desk performance.

Cabello recently got into the Thanksgiving spirit with a sweet Instagram post expressing her gratitude that came just days after she and boyfriend Shawn Mendes called it quits after two years of dating.

"I have a lot to be thankful for, but I'm especially grateful that I gotta whole squad trying to hang w me while I meditate 🧘‍♀️," wrote the Fifth Harmony alum, sharing a short video of herself smiling on the couch, surrounded by three of her dogs. The golden-brown dog in her lap, who is licking her leg in the video, is Tarzan, the pup that she and Mendes adopted together last year.

"Happy gratitude day everybody! I'm very thankful for all of you on here who send me love, listen to my music, and support me on this creative/ life journey!" Cabello wrote, addressing her fans. "Even though I haven't met a lot of you, you guys show me love, kindness, and support and I'm sending it to all of you right back! After all, we're all alive at the same time in this crazy, confusing, magical world and I do believe we're all interconnected and are never truly alone."

The Cinderella star is slated to release her third studio album Familia sometime next year. 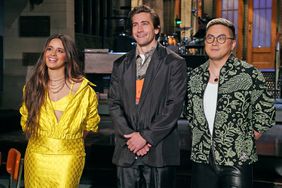