Much like the rest of the Internet, we’re obsessing over Britney Spears‘ new, incredibly steamy music video for the track “Slumber Party,” which features Tinashe and the queen of pop looking hot, confident and very excited to be collaborating. It’s safe to say the video, which dropped at 3 a.m. ET on Friday, is already iconic (and will be filed away in the Britney Canon immediately.)

Tinsahe is a massive Britney fangirl, which is what adds to the two stars’ chemistry. During this year’s MTV VMAs pre-show, the 23-year-old singer belted out a few lines of “… Baby One More Time” – and sounded almost exactly like the pop queen herself. Tinashe even said that her favorite vocal warm-up is singing Brit.

“Usually, for me, it comes with singing a little bit of Britney Spears,” she said. “That’s usually my go-to warmup.”

Here’s a small taste of the Internet freak-out over the two stars’ sexy collaboration:

The video, directed by Colin Tilley, is trending on Twitter. “Slumber Party” is the second track from Spears’ album Glory to get an extra-sexy music video. (#BritneyArmy is still recovering from Spears’ “Make Me…” video.) 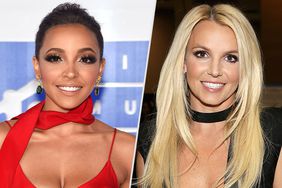 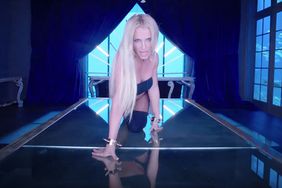