Britney Spears has officially left her mark in Las Vegas, and many children are bound to benefit from it

Britney Spears has officially left her mark in Las Vegas, and many children are bound to benefit from it.

On Saturday, the pop star attended the grand opening of the Nevada Childhood Cancer Foundation’s Britney Spears Campus, located just a few miles from where she performs her residency show. Through donations from ticket sales from her Planet Hollywood show, Spears donated $1 million dollars to make the campus happen.

“I’m just really excited to be standing here for our new NCCF campus,” Spears said before the ceremonial ribbon cutting. “We started fundraising in 2014 and we’ve raised $1 million to build this amazing facility to support the kids and the families everywhere. I’m so thankful to everyone for their generosity in making this a reality and making this happen.”

With wind whipping around her and her boyfriend Sam Asghari nearby, Spears listened on as local officials sang her praises at the opening.

“We can’t thank Britney enough being able to do this. Our dream for many, many years has been to be able to have one one building that all of our 45 programs can come together in one place. And that we are able to to today,” NCCF CEO Jeff Gordon said. “And that doesn’t happen without someone like Britney Spears.”

Through working with Spears and her team, he said, “We saw a side of Britney Spears that so many people maybe don’t have the opportunity to see. You realize what a special person Britney is. She’s an incredible performer, we know all that, but she does care and the more we’ve gotten to know her, the more grateful we’ve become to her, and the kids have adored her.”

“Thirty-five days ago our community when through something that we will never forget. People around the world got to see a side of Vegas that they had never seen before. They saw the love that Las Vegas has,” he said. “Today is similar to that because until today people haven’t totally understood what Britney Spears has meant to this community. We’ve all seen her on stage, we’ve all seen her perform and what a phenomenal performer and entertainer she is, but what’s she’s doing today is another side of Britney that unfortunately most of us haven’t had the opportunity to see before.

He added, “What she is doing today, and continues to do, is going to benefit thousands of children that comes through this facility, and for that we are sincerely thankful and very, very appreciative.” 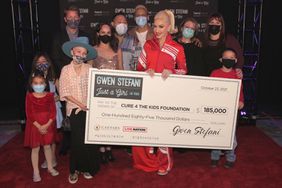