Britney Spears is ringing in the holidays.

In a new Instagram post on Friday, the singer, 38, shared a holiday-themed video montage showing off her Christmas tree and dancing to “Santa Claus Is Coming to Town.”

“Guys, this is what my Christmas tree looks like this year!” she says excitedly in the beginning of the clip, before showing off the massive tree decorated with white lights and gold ribbon.

In the caption of her post, Spears revealed that it has been “hard to keep wanting to share” her life on social media because of the negative comments she receives.

“Happy holidays friends!!!!” the star wrote. “I love sharing with you all … but it’s been hard to keep wanting to share because people say the meanest things!!! If you don’t like a post … just keep it to yourself and unfollow that person!!! There’s no reason to ever go out of your way to make mean comments and bully people ???.”

“Stay happy and nice this holiday season y’all and God Bless!!!” the mom of two concluded the post.

In the comments section of her post, Spears’ boyfriend Sam Asghari supported the pop star, writing: “It’s so easy to cyber attack and hide behind their phones and write mean comments, but when they run into you in real life all of the sudden they act like they have been such a huge fan and want a picture ? #haterplease.”

Spears’ holiday post comes after she rang in her 38th birthday with Asghari while vacationing in Miami, Florida. Earlier this month, the “Toxic” singer gave fans a peek into her birthday celebrations with a video montage of the trip on her Instagram.

In the montage, Spears could be seen enjoying the sandy beach and celebrating at a bowling alley, nearly scoring a split. She also showcased a birthday cake decorated with photos of some of her most iconic moments, and topped with Oreo cookies.

She also went skating at a roller rink with Asghari, 25, who later shared a birthday tribute to his girlfriend with a hilarious video of himself falling while at the rink.

Britney Spears Has ‘Good Contact’ with Her Sons After Family Drama: ‘She Seems Happier’

Heading into Spears’ birthday, a source told PEOPLE that the singer was continuing to do well.

“Britney is good. She sees Sam as much as she can, but he also has his career,” the source said. “Britney is very supportive of it. It seems she doesn’t really think about her own career though. She doesn’t talk about a new album, or about performing.” 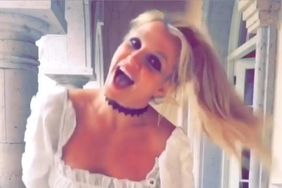 Britney Spears Shows Off Dress She Got for Christmas: 'I Love Modeling New Clothes'