'No Where in My House Is Safe': Britney Spears Gets Spooked — Again

The unsuspecting pop star was in the kitchen when it happened

Britney Spears can’t rest easy in her own house.

The 35-year-old pop star posted a hilarious video on Instagram Saturday in which someone walked behind her while she was in her kitchen. When the person, who was filming, quietly said, “hello,” Spears jumped in the air and screamed.

“I swear…. no where in my house is safe,” Spears wrote in the caption with laughing emojis.

This isn’t the first time Spears has been caught off guard. On Monday, one of Spears’ sons took her phone and said, “So, we just took our mom’s phone and this is take two of scaring her.”

As he creeped behind his mom (her other son likely playing cameraman), Spears is seen standing at the stove. He let out a scream and she screamed back, jumping the air and quickly yelling, “Preston! Jayden! Stop!” as her son giggled.

In September, her two sons, Jayden James, 10, and Sean Preston, 11, played a prank on their mom using her Instagram account.

In the clip, Preston revealed that they’ve stolen Spears’ phone and they were about to “scare the heck out of mom.”

When the young pranksters heard Spears making her way over, they fell silent until Preston jumped out and yelled at his unsuspecting mom.

He Did It Again! Britney Spears' Son Steals Her Phone to Prank Her — See the Hilarious Clip 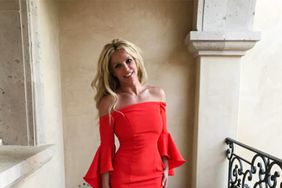