Britney Spears Dances with Sam Asghari and Gives Him a Kiss by the Pool: 'What a Fun Summer'

The lovebirds vacationed together in Miami last month

Britney Spears is twirling her way through summer with boyfriend Sam Asghari!

On Wednesday, Spears, 37, shared a video compiled of clips that show her and Asghari, 25, dancing poolside.

The “Gimme More” singer sported a snakeskin bikini as she spun into her beau’s arms. The two then shared a sweet kiss.

“What a fun summer👙 @samasghari,” Spears captioned the post, which also included adorable selfies of them together.

The couple have certainly enjoyed the warm weather as just last month they jetted off for a romantic vacation in Miami.

Spears and Asghari were seen smiling and having fun together. They were also spotted riding jet skis and relaxing on a yacht.

In addition to basking in the sun, Spears has also been working on her fitness — and passing her challenges with flying colors.

The singer has long been known to share her workouts with her Instagram followers and on Monday, she revealed she had successfully challenged herself to spend a little extra time with one thing she typically dreads: the treadmill.

Spears posted a video on Monday that she filmed while running on the treadmill in a gray sports bra and black pants.

She said that she typically runs for 15 minutes before taking a break for various floor exercises. Then, she’ll hop back on the treadmill for another 15 minutes — but on that day, she wanted to go for 30.

She continued, “I get back on again and do another 15 minutes. But today my challenge is to go 30. Do you think I can do it?

The video then flashed to Spears lifting weights in a sped-up time lapse video set to electronic music.

In the caption of the clip, the star revealed that she successfully completed her challenge and ended up running on the treadmill for 40 minutes.

Since checking out of an “all-encompassing wellness treatment” facility in April, Spears is heavily focused on her health and frequently shares videos to break down her workout routines.

Britney Spears Breaks Down Her Summer Exercise Routine: ‘The Key to My Workout Is Repetition’

Last week, she shared a video of her exercising while listening to her own cover of “Tom’s Diner” by Suzanne Vega.

In the clip, the pop star wore a hot pink sports bra and black sweatpants as she cycled through a variety of workouts, including squats and tricep curls. 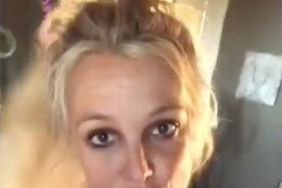 Britney Spears Challenges Herself to an Extra 15 Minutes on the Treadmill: 'I Literally Hate It' 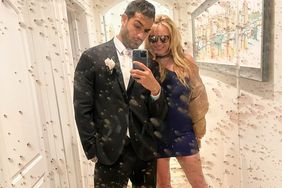