"After reviewing the evidence, there is insufficient proof that a criminal offense was committed by Mr. Spears," stated the Ventura County District Attorney's Office

Britney Spears‘ dad Jamie Spears has been cleared of child abuse charges following an alleged altercation with his 14-year-old grandson.

On Tuesday, the Ventura County District Attorney’s Office announced that criminal charges will not be filed against Jamie Spears as there was “insufficient proof that a criminal offense was committed.”

Jamie, 67, made headlines earlier this month after Britney’s ex-husband Kevin Federline and his attorney Mark Vincent Kaplan filed a police report, alleging that the singer’s father physically abused Sean during a visit at his home on Aug. 24.

According to Kaplan’s testimony as recorded in the police report, Britney’s 13-year-old son Jayden was also present during Jamie and Sean’s fight. The Blast reports that Jamie allegedly “violently shook” Sean after breaking down a bedroom door to reach him.

“Britney did the right thing and removed the children and took them out of there,” said Kaplan, who added that Federline, 41, still wants his ex-wife to have “continuing and meaningful contact with their mother.”

A source previously told PEOPLE, “There was physical contact that made Sean scared and upset.”

Britney Spears Enjoys Bikini Beach Day in Hawaii Amid Family Crisis: ‘It’s Been Difficult for Her’

“Britney got upset as well and ended their visit with Jamie,” the source said.

The singer — who now shares about 10 percent of custody of her kids with Federline — “can’t believe that her dad would jeopardize her relationship with her boys,” added the source. “Britney is always terrified that she will lose custody.”

Following the alleged incident with Sean, Jamie “decided to temporarily step down” as Britney’s conservator.

“Jamie has to focus on his health. He was also told it’s best to step down temporarily because of the police report,” a source close to Britney previously told PEOPLE. “Jamie seems stressed about it, and it’s not a situation that he wants to be in.”

According to TMZ, who first reported the news, Jamie filed legal documents to “temporarily relinquish the powers of conservatorship … due to personal health reasons” and asked for Jodi Montgomery, a woman he describes as Britney’s “care manager,” to be appointed as temporary conservator.

Britney Spears Is ‘Upset’ with Dad Jamie After His Alleged Altercation with Her Teen Son: Source

Late last year, Jamie was hospitalized after a life-threatening colon rupture and Britney took a career break amid his health crisis to help care for her father. She also entered a wellness facility earlier this year to focus on her own mental health. 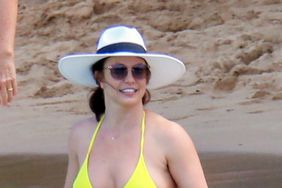