Following Britney Spears' impassioned plea to a Los Angeles court to terminate her conservatorship, many are wondering what happens next. During the hearing, Spears was not questioned by her conservators' lawyers, nor have they had the opportunity to rebut her allegations in court. As stated by the judge on Wednesday, Spears still needs to file a formal motion to end the conservatorship.

PEOPLE spoke to four legal experts who are not involved in Spears' case — healthcare lawyer Harry Nelson, family law attorney and former psychologist David Glass, trial attorney Tom Lallas and trust and family law attorney David A. Esquibias (who represents Amanda Bynes) — to break down what might happen next.

How common is it that someone as young as Britney Spears is under a conservatorship?

David Glass: What makes this unique is that Britney is a young person who has apparently suffered from mental health problems. It makes sense for older people who can't remember where they live, can no longer drive and are having trouble knowing what's going on in their day-to-day life, for them to have someone step in and start making decisions for them. Those people also typically won't come and complain to the court and say, 'This is unfair, I'm being controlled, I want some freedom, I don't want these people lording over me,' because they don't know that that's going on. They're dealing with dementia.

David Esquibias: Usually someone in their 30s who is conserved is developmentally disabled. They have to be substantially unable to manage their financial affairs and resist fraud and undue influence from others. There has to be no other alternative. The conservatorship has to be the last resort.

Is it uncommon for a conservatee to speak in court?

What impact could Spears' statement have?

Lallas: To me, it was heartbreaking and reflective of an American tragedy. It gave us an opportunity to look into the window of the soul of Britney Spears and understand how she's tormented in her state of mind. It reflects in my judgment that she's led a life where she's been obliterated by a tsunami and paparazzi reminiscent of Princess Di and Dodi Al Fayed, for example, and crushed by a deprivation of privacy, and the demolition of her independence. All of those things when I try to look at life through her eyes and I think that it's very unlikely that any of us who are functioning healthy adults unencumbered by mental health issues would be able to cope with the pressures that have been imposed upon her, by all of these different circumstances that constitute Perfect Storm.

Having said that, it's my view that a skillful lawyer could argue that the statement reflects that there's a factual basis that she is not sufficiently impaired, or debilitated to require a continued conservatorship. And that she has the ability to understand transactions relating to our state and to exercise her own judgment.

How common is court-mandated birth control and psychiatric medication for people under conservatorships?

Harry Nelson: It's fairly unusual. You tend to see it in cases where you're dealing with adults with a significant cognitive deficit or with some kind of severe mental health issue where they are at potential risk of self-harm or harm to others. So it's pretty rare and pretty narrow set of conditions. My view is that it's absolutely shocking that this is still in place for somebody like Britney Spears.

Esquibias: Typically, a conservator doesn't have the right to force psychotropic drugs or secured perimeter facilities — facilities with locked doors where they can't walk in or out. It requires special sign-off from the judge, and is sometimes used for dementia patients or in some cases people with severe mental illness. As invasive as it sounds, a conservatee can be told you have to be on birth control. The idea is to protect the conservatee because the conservatee is unable to care for herself while pregnant or during childbirth.

Britney said multiple times she wants the conservatorship to end without an external evaluation. Can that happen? What next steps can she take and how long would the process take?

Esquibias: A judge is obligated to take in all the evidence, and in a conservatorship setting the evidence typically includes the confidential written report of the probate investigator who is usually a licensed social worker who interviews the conservatee and all family members to the second degree. Based on those interviews, the investigator comes to a conclusion and writes a recommendation to the judge. The judge takes in that piece of evidence and listens to the testimony of the conservator, the conservatee and to any relative to the second degree, and frankly, anyone else the judge wants to listen to. After taking in all the evidence, the judge is equipped to make a decision. That's why it would be very unlikely to render a decision without the opinion of a medical expert.

Nelson: The judge has the discretion to say they want the evaluation. In a normal situation, that would be an appropriate step to take. I just think this case is a black eye on the conservatorship system in California, and the fact that Britney has been subjected to this is scary. You think about somebody that has her fame and power in public, and she's been subjected to this. I think it undermines the credibility of our system. It's almost a monstrous kind of circumstance that this has been allowed to stand.

A judge is going to have to decide whether they're going to want an independent review or evaluation. I would think if she is able to demonstrate – even though it is common to rely on outside sources, judges generally don't like to be in the position of making direct evaluations and are often deferring to outside evaluators — I think there is enough evidence here for a judge to forego that evaluation. The judge may want another evaluation, but I would not be surprised if the judge forego it altogether based on the evidence that she is not somebody that needs to be under these severe controls.

Glass: She said she's done her research and she's found out that conservatorships are sometimes terminated without an evaluation and that's not exactly true. In order for the court to terminate a conservatorship, they need to make a finding that the person has regained their capacity. They lost the capacity to make decisions for themselves regarding their health, regarding their estate, their money. And now the court has to make the decision that the person has regained their capacity. The only way to do that really is to have a doctor or psychologist or even a neuropsychologist do a full analysis. Have her into the office, do a full neuropsychological battery [of tests] to show that she can make decisions, she does understand the difference between right and wrong, she understands the importance of money, all those sorts of things have to be decided, so it's very unlikely that the court is going to let her out of this conservatorship without those underlying findings.

How long is all of this going to take? What are the next steps?

Glass: The court said that it will work with all parties and their counsel to find the next available dates. Sometimes when you're in court you can file something and it won't get heard for six months, but I don't think the court is going to do that here. The court seemed inclined to move this along as quickly as possible.

Britney is going to have to meet with her court-appointed attorney, Sam Ingham, and he's going to have to file two different pleadings: one is a petition for termination of the conservatorship where she explains why she got into it, what kind of treatment she's received, how she's different now than she was 13 years ago and why she now thinks she has the capacity to care for her own person and to care for her estate. The other thing she's going to have to work with Mr. Ingham on is she made a request that she doesn't want to work with Ingham anymore, he was appointed by the court — again, people who are under a conservatorship can't make their own decisions, they can't go out and hire an attorney or pay an attorney because they don't have the capacity to make these decisions, so the court always appoints someone. Sam Ingham is well-regarded in Los Angeles in the probate court world. He's one of the top people. Looking over the pleadings on the docket, he's been very careful for her but she's asking to replace him with private counsel and he's reported to the court, "If Ms. Spears asks me to do this, I will do it."

Lallas: The pandemic has paralyzed the court system, but we're getting back up on our feet and cases are being heard again. And in this case, it's hard for me to imagine in terms of preparing as a trial lawyer, that if the psychiatric evaluations are required, it's hard for me to imagine that it could be done in less than say, 3-6 months. ... There's no question that Britney is unhappy with her circumstances and that she wants a remedy, but just because she says to the judge, "I don't need to be evaluated," doesn't mean to me that a judge will accept that as a mandate and make a ruling without an evaluation. So I think that there's a probability that this case could play out over a period of many months and perhaps six.

What is the main factor that might determine the future of the conservatorship?

Lallas: The issue here is not whether Britney Spears would make decisions or judgments that you and I would not make or whether we would consider them to be ill-advised, incorrect or poor decisions with respect to her career, her investments, or even her marital status because all of us and I'm exhibit number one, throughout our lives make decisions about investments or careers or assets or marriages, where we look back through the prism of experience and we regret the decisions. And in our own private thoughts and reflections recognize that we made bad, poor or incorrect decisions, but that's not the standard. No one can be held to an exalted rule of perfect judgment. The issue is what is her habilitation and impairment? And is it sufficiently aggravated to prevent her from making knowing intelligent and understanding judgments about her assets and estate. 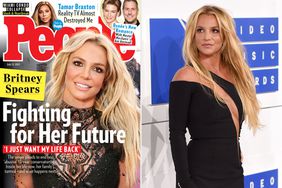