"When you break something it tends to heal stronger, specially when you're my girl," Sam Asghari quipped of his girlfriend Britney Spears' injury

The pop star is healing after breaking the metatarsal bone on her foot while dancing, her boyfriend Sam Asghari revealed in a lighthearted post on Instagram Tuesday.

“When you break something it tends to heal stronger, specially when you’re my girl??,” he captioned the photo set. “My lioness broke her metatarsal bone on her foot doing what she loves which is dancing ? Wishing her the best recovery so she can jump, run, and dance her butt off ?? #stronger.”

Dressed in a hospital gown and with a thermometer sticker attached to her forehead, Spears, 38, and Asghari, 26, posed for a cat-filtered selfie before the personal trainer personally customized his girlfriend’s cast.

“STRONGER,” the cast reads in alternating blue and green letters as Asghari fills in the final “R.” In a Instagram Story video, Spears’ 2000 hit plays as Asghari shows off his handiwork.

Spears isn’t the only member of her family to land in the hospital with an injury this week — her niece Maddie broke a bone as well.

On Valentine’s Day, the pop star’s sister Jamie Lynn revealed on Instagram that 11-year-old Maddie had gotten injured after a “little accident at recess.” She added on Instagram Stories Monday that Maddie had suffered a buckle fracture.

“Thanks to everyone who helped us get this checked on quick, and everyone who text to check in!” Jamie wrote. “It is much easier to just post this, then respond to every text, because I’ll forget to respond, and then I’m being rude. #HappyValentinesDay.”

With Maddie’s recent injury in mind, Jamie was quick to chime in on Asghari’s post of her sister on Instagram. “Between her and Maddie we are running a hospital!!” she wrote.

Fans also commented and shared their concern for Spears. “Let her know she’s amazing hope she heals soon and most importantly is happy !!!” one person wrote. “Take care of her for us, Sam ❤️” another added.

Over the weekend, Asghari posted a sweet video on Instagram of himself and Spears as they were horseback riding in celebration of their fourth Valentine’s Day together.

The pair first met on the set of Spears’ “Slumber Party” music video. They were first linked romantically in 2016 when they were photographed leaving a Los Angeles restaurant after enjoying a dinner date. 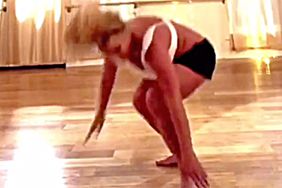 Britney Spears Shares Video of the Exact Moment She Broke Her Foot Dancing: 'Sorry It's Kind of Loud!' 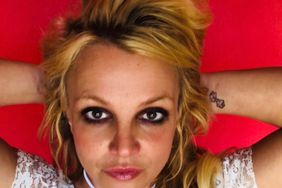