Brandy and Monica's nostalgic track "The Boy Is Mine" will always be a classic.

On Thursday, Brandy, 42, posted a sweet TikTok video of the duo lip-synching the introduction to their fan-favorite tune, which was a No. 1 hit on the Billboard Hot 100. "@syraismith got me together," the proud mom joked of her daughter.

"Excuse me, can I please talk to you for a minute?" she began in the clip. "Mhm, sure. You know? You look kind of familiar," Monica, 40, replied.

In the video, the "Don't Take It Personal (Just One of Dem Days)" hitmaker was seated in front of a fireplace wearing a white robe that was complete with a lavender "M" embroidery.

Brandy's portion was recorded from a different location. The Cinderella star wore an all-black ensemble that she topped with a brimmed hat.

In September, the pair joined forces for a Verzuz battle and broke the record for most views on the webcast series — with 1.2 million concurrents.

While guesting on the show, Monica and Brandy addressed what some music listeners speculated was a decades-long rift between them. Some believe it began soon after the 1998 release of their duet.

On Verzuz last year, the stars admitted that before appearing on the show they hadn't spoken in eight years.

"I wanted to speak to you face-to-face," Monica told Brandy during the friendly battle. "The more we were talked about, the more it came to be difficult, unnecessarily. I really, really am a straight shooter and I really do admire what you've done musically and what you've had to endure personally."

Brandy shared similar sentiments, saying, "I have the utmost love and respect for you as well, for somebody to start at 12 years old ... The longevity of your career, nobody [knows] what you've been through."

Their last joint release came in 2012 when they dropped "It All Belongs to Me," a follow-up single to the '98 smash hit. 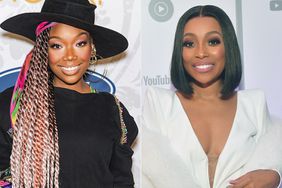 Monica Opens Up About Joining Forces with Brandy for 'Verzuz' Battle: 'She Is an Icon'