Rage Against the Machine drummer Bradley Wilk’s marriage ended in part because of an affair he had with actress Juliette Lewis, his wife claims.

Wilk, 50, separated from his wife Selene Vigil-Wilk in 2013 after eight years of marriage, before reconciling and separating again. The former couple shares two children: Luka, 12, and Alexander, 10.

Lewis, 45, and Wilk began going public with their romance in 2016. They appear to still be together.

Vigil-Wilk has now filed to restart their divorce proceedings, in court documents obtained by PEOPLE and originally reported by The Blast.

The documents reveal Vigil-Wilk, 53, originally filed for divorce in 2013 after learning that the musician had allegedly been having an affair with a Las Vegas woman. However, later that year, Vigil-Wilk says the couple reconciled and decided to stay together.

Then, in early 2016, Vigil-Wilk says Wilk informed her that he was going on tour with Lewis’ band. “He left and they went on tour for several months with her and the band. I later discovered that he was having an affair with her,” the document reads.

Vigil-Wilk then writes that her husband told her he was planning on moving in with Lewis: “In late 2016, Brad returned to Los Angeles and informed me that he wanted to set up a mediation. He said that he was moving in with Juliette Lewis.”

“In November 2017, I finally realized that I could not continue in a marriage like this,” she writes. “I told Brad that I was going to pursue the divorce.”

A rep for Lewis had no comment on the filing. A rep for Rage Against the Machine did not immediately respond to PEOPLE’s request for comment.

The Camping actress first hinted at the blossoming relationship on Instagram. Shortly after announcing that Wilk would join Lewis on her band Juliette and the Licks’ European tour, she shared a cozy shot of the two, calling him her “honey.”

Lewis and Wilk weren’t shy about sharing their romance on social media. The actress used the hashtag #DomesticBliss on one shot of the two, and captioned another snap of the two cuddling in bed “LOVE IS REAL.”

Wilk also showed his affection for his new love on Instagram in 2016, posting a selfie of himself wearing a souvenir shirt from the Juliette and the Licks tour with Lewis’ face on the front.

“Beautifully Fierce, Force of Nature, this one,” he captioned the photo. 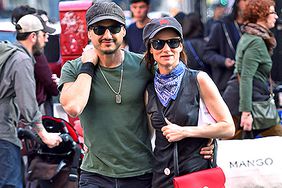